The following questions were asked on reading textbook chapters and previewing a presentation on torque and rotations. 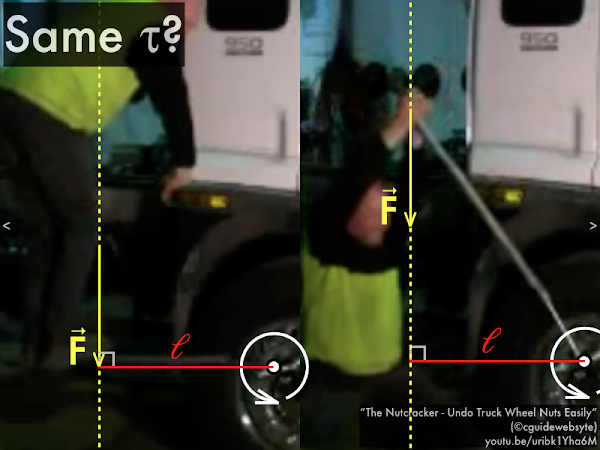 "Magnitude of torque is equal to the magnitude of force times the lever arm, which means there is more torque when you push near the outside end of lever in the direction of the hinge. The line of action is parallel and overlapping the force applied."

"How to solve for torque; it can vary due to the position of the force and the length of an object that it accompanies. if a force is applied at the very end of a length while being perpendicular to the object you'll achieve maximum torque."

"The idea of Newtons's first and second law when applied to torque and rotations. Like force, when net torque is equal to zero, Newton's first law is in effect; moreover, if torque adds up to something other than zero, Newton's second law applies."

"The lug nuts do get supertight so it was helpful to see an example that I could personally relate to which makes torque and twist easier to understand. The force and direction (ccw/cw) also made sense because of the rotation or 'twist' and the force making it do so."

"Exactly how to apply Newton’s laws to the rotational motion."

"The line of action and the perpendicular lever arm. Although I generally understood the examples of Newtons's laws in relation to torque, I need help in class--through examples--to see how these lines of actions are drawn and how they allow the determination of a lever arm or vice versa."

"I think I understand torque for the most part. I just have trouble visualizing how the line of action and lever arm work for different/more complicated real-world examples."

"Just the formulas obviously, but nothing practice won't help."

"I am confused about how torque can zero, or would that be considered a non-existent idea?"

What is the SI (Système International) unit for torque?

"Newton·meters, not to be confused with joules."

Briefly describe how the line of action should be drawn for a given force.

"The line of action is drawn collinear with force."

"Extend a line along force vector."

"The line of action should be drawn co-linear with the force. It is an extended line and is usually dotted."

When a lever arm (or moment arm) is drawn, briefly explain where it starts, and how it should intersect the line of action for a force.

"The lever arm is defined as the perpendicular distance from the axis rotation to the line of action of the force."

"Starts at the axis of rotation origin, and is perpendicular to the line of action."

"Can all the forces besides weight force be considered in calculating torque?" (Yes, definitely.)

"How would the guy use the spanner to apply a greater amount of torque? Use a longer spanner?" (Yes, or apply a perpendicular force to end of the original size spanner.)

"Am I just completely missing the section of Newton's rotational laws? I am assuming we are just applying the laws we already know?"

Your use of 'esoteric' had a double meaning in that few people would use such a means to calculate torque (line of action and perpendicular lever arm) would be equaled by the number of people who would understand the meaning of 'esoteric.' LOL"