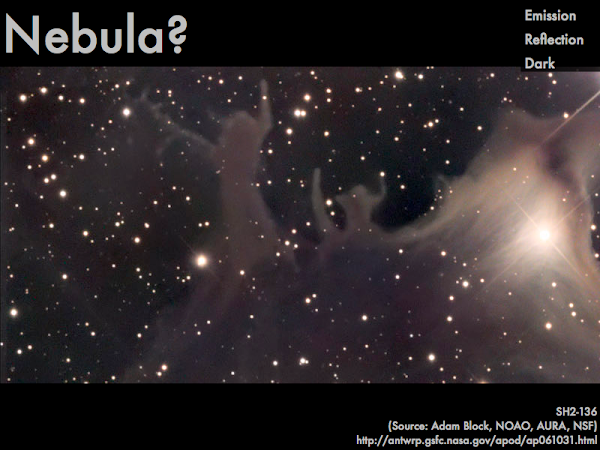 "I'm excited to learn more about how fusion works. It just seems cool."

"How fusion only happens in the core of a star."

"I appreciated the cheerleader analogy, it actually really helped to be able to visualize what's happening at the sun's core."

"It is fascinating that lower-mass stars last longer than the current age of our universe, although it makes sense because, effectively, they are 'burning' slower."

"I thought it was funny that big stars burn out faster. For some reason reminded me of sumo wrestlers."

"Luminosity depends on mass for only main sequence stars--I thought that would apply for all stars."

"I just found how main sequence stars are ordered by mass, however the other stars (giants, super giants, and white dwarfs) aren't. It just caught my attention."

"That after a star runs out of hydrogen it dies :("

"It's amazing that there is so much matter in space, I thought it was just empty space."

"I thought the nebulae were super-cool (and super pretty). It's kinda weird to think about there being 'clouds' in space, I like it though."

"That nebulae are different colors due to the way photons interact with gas/dust."

"How the different components of nebulae determine their colors."

"I found that when there are a cluster of stars and when dust is around from the stars they turn into little planets around the star. This was interesting to me because when you look at the picture of the star cluster it just looks like a bunch of stars."

"Supernovae are interesting because they can 'kickstart' the formation of new stars."

"Star formation was one of the things I was most curious about coming into this class. It's interesting to learn about the process."

"Fusion because there's big words and I am tired so my brains not really working if I'm being honest."

"I find the H-R diagram to be confusing at times. I think it has to do with the multitude of variables displayed. I thought I had it figured out last class, but then certain stars break from the mass-luminosity relationship. Conceptually that might have thrown me off some. My plan to further my understanding is to maybe ask for a walkthrough in class."

"I found the plotting of the other stars off the main-sequence a bit confusing because there's no correlation between their mass and luminosity."

"The main sequence lifetimes for different sizes of stars confused me for a little bit because I read it wrong when I first read it. At first I though the bigger stars would stick around the longest."

"I'm not super-confused but would just like more practice with determining what is and isn't in a nebula."

"Learning about the different types of nebulae was a bit confusing for me. For the reflection nebula, it's hard for me to imagine how the cloud filters out the certain colors from the star hitting it. I don't understand how these nebulae behave differently in space based on their composition."

"The H-R diagram doesn't make sense to me, but I think I understand the house party model?"

"I don't understand the H-R diagram; specifically the turn-off point."

"It's all rather hard to grasp."

"Nothing in particular, what I read made sense to me. "

"I didn’t find anything confusing."

Rank the luminosities of these main-sequence stars (1 = brightest, 3 = dimmest). (There are no ties.)
(Only correct responses shown.)

"Because it is much more effective at higher temperatures. The collisions between nuclei would not happen at room temperature."

"Because hydrogen can only be fused if it is moving very fast and under lots of pressure for enough force to overcome proton-proton repulsion."

"The amount of pressure required would be ridiculous."

Rank the lifetimes of these main-sequence stars (1 = shortest, 3 = longest). (There are no ties.)
(Only correct responses shown.)

"Why aren't the other types of stars ordered in terms of their masses on the H-R diagram?" (Because they're dying or dead stars that ran out of hydrogen in their cores.)

"I need more help on the H-R diagram and the mass and luminosity stuff."

"The H-R diagram is a little confusing to tell which stars have a higher/lower luminosity. From what I read the bottom stars have less right?" (Correct.)

"How do stars form from dust clouds? Or is it the hydrogen in the dust clouds that forms the stars? where does the dust come from in the first place?" (The universe started out with just hydrogen, which formed the first stars. Then after the stars fused hydrogen into other stuff, they they exploded, such that when subsequent stars can form (from the remaining unused hydrogen), planets can form around them from the "dust" that was produced from the previous generation.)

"So, when the Enterprise hides in a nebula from a Klingon warship (in the movie Star Trek II: The Wrath of Khan), wouldn't it be best for it to be a dark nebula, with the large clumpy dust particles? But then it shouldn't have looked like a big glowing cloud, right?" (You sound like you know way too much astronomy.)

"I found dark nebulas to be interesting. When I was thinking about it, the night sky is already dark. If you look at a long exposure photograph you could then see these dark clusters called dark nebulas. It's amazing that they are completely blocking a viewer on Earth from seeing some stars because of their thick dust clouds. My question is, can you see them with the naked eye, or only through photographs? I feel like I would have noticed a patch of the night sky missing by now." (There aren't any big dark nebulae close for us see them with the naked eye noticeably blocking stars, but if you do a time exposure so you can see faint, distant stars, you can make out a variety of dark nebulae that block out those really faint stars; those dark nebulae especially stand out with the Milky Way as a background.)

"Can a supernova be the birthplace of a black hole?" (It is, specifically a type II supernova.)

"Would you ever actually have a house party with your students to see who was truly honest about their answer on this assignment?" (That sounds like a science experiment to me.)

"You have any fun plans for Halloween?" (Mrs. P-dog and I celebrate Madonnaween.)