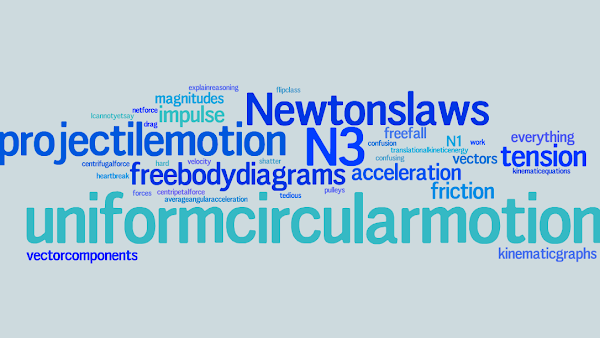 [Responses have been edited to consolidate related common subjects.]

Describe your most confusing subject, and briefly explain why this subject interested you. (Graded for completion.)

"impulse, circular motion, and newtons laws is confusing to me because i havent fully been able to grasp the concept of how it relates to the real world."

"Every chapter, because I am a logical thinker and it is very confusing to me when I cannot use it in the problems."

"Uniform circular motion, I guess it is still not intuitive why a force is directed inwards towards the center of the circle, but you feel like something is pulling you outward (such as making a sharp turn in a car)"

"Probably Newton's third Law. I like POF OST ITO, but it's hard for me to relate the two diagrams to each other."

"Impulse has been the most confusing concept for me. There is just a lot to grasp when we account for the time which a force is applied and how that will affect the velocity change and work being done on another object,"

"Circular motion. I feel like we didn't cover that material well enough."

"Uniform circular motion is the most confusing to me. Not really sure why, it just doesn't seem to click like other subjects."

"I cannot yet say"

"The way normal forces and weight forces interact in some situations was difficult for me to understand."

"Static friction will be my most challenging subject, but I will be prepared. I find it challenging finding all the forces acting upon an object. But none of this will hold me back."

"I had the most difficult time with projectile motion (especially the diagonally launched projectile motion) because it is hard for me to figure out what each given is from a written problem. Each circumstance is different and just when I think I understand it I miss one little "given" and mess up a whole problem."

"the five equations because I'm not of the most statistically-based mindset."

"the equations that I had to do with projectile motion were probably the most confusing because there were so many equations to pick from."

"Applying forces, Newtons laws, and friction in one problem. It is doable but there are so many variables needed or need to figure out that it can get a bit confusing sometimes."

"The forces were kindof confusing, especially when dealing with the ideal pulleys...."

"I think it is most confusing when answering a problem about Newtons laws, and other motions, using the correct terms to justify the answer, even if the answer is correct."

"Forces dealing with pullies and acceleration were confusing to me because it is sometimes difficult figuring out the direction of net force."

"Sometimes I cannot follow how you get numbers when using a free body diagram and I'm worried that it will be a big part of the midterm."

"I found Newton's Laws confusing because they all seem very similar to me and I have trouble in telling the differences."

"horizontal free body diagrams involving the cylinders, its difficult for me because its hard for me to visually picture it."

"Impulse seemed intuitive when I was first introduced to it. But the example of the baseball and Bay really confused me because it seems like even if you were in contact with the ball for a longer period of time they the ball would already start to fall and the lesser speed wouldn't make as much of an impact."

"Sliding and falling connected boxes. Would have never done the correct procedure to solve this problem."

"Perhaps the most confusing thing is uniform circular motion. Is it actually possible to tell if a circle is uniform?? Kind of unrelated. Sorry."

"newtons laws are probably the most confusing. I get lost in which law is supposed to be applied."

"Uniform circular motion, I'm still not sure why normal force is decreased when velocity increased. Actually as I was typing this I think I figured it out. Since normal force is opposite of weight force, the faster the velocity the less normal force is going to push back."

"That double box problem asking to explain why the friction force of the top box on the bottom box is directed right. I understand that because of newtons 3 law there is an opposite and equal force directed right but that still make no sense in my brain."

"I found Newton's third law confusing. I found it difficult to discern what objects are interaction partners or not."

"I get messed up sometimes when I try to set up diagrams to represent angles and forces. I'm very visual and I like to use visuals, but often times I switch things up and don't use common sense when it should be used."