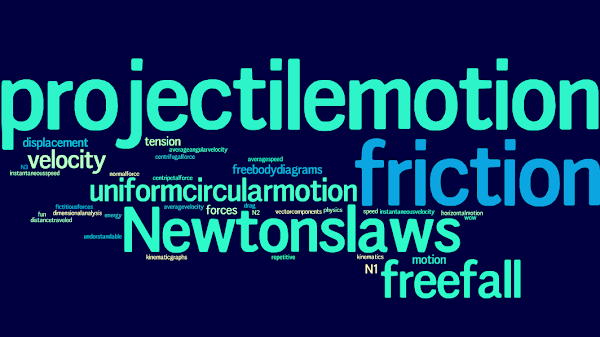 [Responses have been edited to consolidate related common subjects.]

Describe your most interesting subject, and briefly explain why this subject interested you. (Graded for completion.)

"kinematics, horizontal and vertical motion, and fictional forces is interesting because friction can affect motion and motion can be solved and predicted by kinematics. In a sense they all relate to eachother"

"Newton's Law, very hard topic but interesting everything works and I many cases logical thinking doesn't help. Bungee jumping, I do bungee jump and skydive so this was interesting to see the results from physics perspective."

"Projectile motion, because there are formulas I can use to find relevant pieces of information."

"Probably terminal velocity. It's just an interesting subject to me, I like the thought of it. That there is only a certain speed that an object can fall and at that moment it is going fast, but not accelerating. I like that subject."

"Normal forces were pretty interesting to me. It never occured to me that when you apply a force on an object, and the object's velocity doesn't change as a result, that object is "pushing back" against the force, even though a typical person would think the only thing pushing is the force itself."

"Newtons laws because it's three very simple statements that can apply to so many things in many different ways."

"To me, Newton's laws and free body diagrams were the most interesting. It is really cool to be able to break down the specific forces in an action and see how they react with each other."

"I cannot yet say, but to guess ahead of time, high-speed car propulsion w/ ramp."

"Finding the means for acceleration and velocity in objects."

"The most interesting for me to learn was uniform circular motion because I have seen so many rollover accidents before and have been involved in one. Learning about some of the physics behind it made me to think about the design of these cars and how different factors can cause vehicles to flip. Also it made me understand just how beneficial it could be to understand physics to better design products in general. It can literally save lives!! (Oh and it can make life more fun because we can design awesome circular rides that are safe!!)"

"Newton's Laws. Because they're cool."

"Friction was the most interesting to me because it made the most sense and i never though of friction pullinf in the opposite direction of the object that is against it."

"I like the subject of projectile motion. What we have learned so far seems simple like an object being thrown at an angle and figuring out stuff."

"The friction part that we studied is very interesting. Now while at work I find myself constantly thinking about the friction required. For example, the other day I was parking a dump truck on a job and its parking brake is a drum, and you pull the lever up and it pushes the pads out against the drum, which is connected to the driveline which stops it from moving...unless you are on a steeper hill. The numbers starting running through my head about how much it would take to stop the truck weighing 16+ thousand pounds....very interesting...."

"The coin tossed across the Pitomac River as it sortof relates to the same relatvie problem of the stunt car not making it over the river. Especially when it came to the point landing below y-axis."

"Projectile motion, because it is interesting to me that the x velocity of an object moving through air (with no air resistance) does not have an effect on the y velocity or time in air."

"I liked projectile motion because it can be used in so many different situations and sometimes I think its a lot easier to just plug and chug and equation."

"Displacement because I found it interesting that can be the same as distance traveled and that it can also be different."

"projectile motion, because i understand it."

"Finding the change in acceleration. I enjoy being able to graph the values I find it makes visualization easier."

"Washington's Throw, it is easier to gauge if any outcome is outrageous by comparing to previous knowledge."

"Projectile motion is probably the most interesting because I wonder how it is possible this stuff was ever discovered!"

"projectile motion, it seems the most applicable to everyday things."

"The difference in normal force with banked and unbanked roadways."

"I think it's interesting how the max static force is higher then the max kinetic force."

"Projectile motion is interesting to me"

"I found predicting quantities of a trajectory very interesting and applicable to many real life scenarios."

"Kinetic and static friction. It is interesting that a force (static friction) has a range and that the kinetic friction is smaller than static. I don't know why, but I find interesting the reactions between different surfaces and how they differ depending on the kind of surface, but not the area of that surface."

"Force was the most interesting so far because it is applicable. I can accurately make an estimate on how much heavier a ball would be if I dropped it off of my balcony and into my friends hands."