The following questions were asked on reading textbook chapters and previewing presentations on the Milky Way's shape, size and composition and spiral arm structure and formation.

"I really liked the Fe[26] game, I may or may not have spent half an hour playing it when I should've been studying."

"I didn't think about the fact that we can not see the rest of our galaxy from our perspective."

"I find it interesting that if we use an infrared or radio telescope that we can see the whole Milky Way galaxy and if we don't do this we cannot see as much of it."

"Learning a bit about dark matter in the Milky Way was interesting. I had no idea that dark matter is what creates and spreads out the gravity in our galaxy. This unusual matter that does not deal with light or dust or gas is holding our galaxy together."

"Dark matter, thinking about the majority of matter is not seen/doesn't interact with our realm of reality is fascinating."

"I thought the 'MACHOs' and 'WIMPs' was interesting because I have never heard of those for explaining dark matter."

"I found it interesting how all the dark matter 'WIMPs' could have a substantive amount of mass and they don't interact with any light and that they permeate and pass through our galaxy."

"I like that the explanation for the broken spiral arms I saw in the lab is finally revealed."

"The density wave 'traffic jams' in galaxies. I was curious to know more about spiral galaxies."

"Nothing really was confusing this week. I'm still scratching my head about our last two weeks' topics (star types and what they 'eat')."

"It was confusing thinking about the size of our galaxy."

"It's kind of difficult for me to imagine the Milky Way being a flattened disc in comparison to our position on Earth. I'm a very visual person and my brain wants to make the Milky Way rounded since we observe it from a rounded planet."

"The idea that we live in a 'flattened disk-shaped galaxy' is confusing because that is hard to visual. I don't see it like a flat disc."

"Dark matter--puzzling over exactly what is is difficult to grasp, as it almost doesn't seem to play by the same rules of physics as the observable world."

"Dark matter. Just like black holes, it's hard to imagine something that can't be seen."

"I don't fully understand how persistence of vision is associated with the Milky Way."

"The PimpStar Rims and traffic jams. I don't really know how to explain how they work."

"I am confused about the PimpStar Rims. Why do people do this to their cars? I truly don't understand."

"I found the PimpStar Rims and everything were confusing; I need more explanation on them."

"I don't really feel confused on anything."

In your experience, how much of the "Milky Way" (the band of faint stars across the celestial sphere) have you been able to see in the night sky?
Using the most powerful light-gathering optical telescopes in the darkest skies, __________ of the stars in our entire galaxy can be observed from Earth. 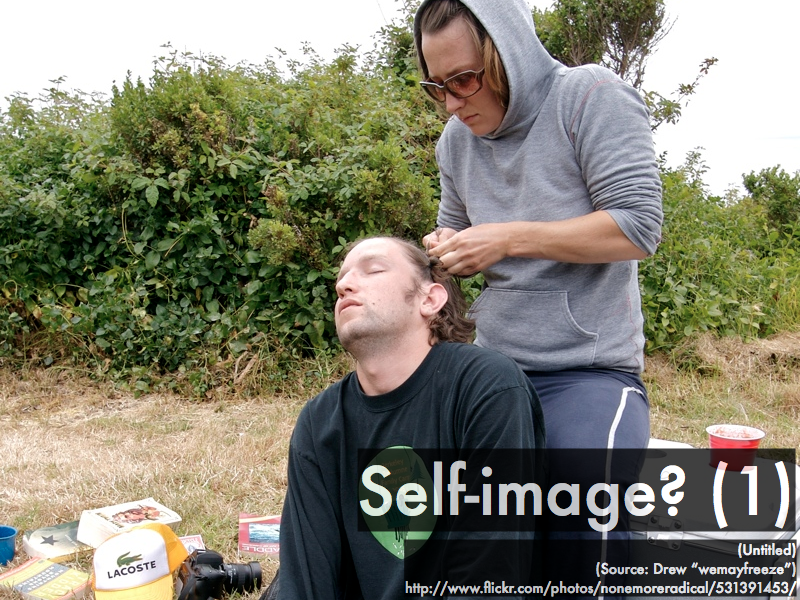 If you did not have access to a mirror while camping, what could you do to find out whether or not you're having a bad hair day?

"Ask the most honest person around you."

"Use a still pool of water as a mirror."

"Use your phone's camera."

"Just throw my hair in a messy bun that way it looks crazy on purpose."

"If you're really camping, every day is a bad hair day. You will feel the hair sticking out everywhere."

"I always have a bad hair day."

"Look for wild animals, see if they run."

"You can use your hands and feel your hair to find out if your having a bad hair day or not."

"Through your own shadow." "

"Both have LEDs that flash and when put in motion, they appear to create a pattern or seemingly solid color due to blurring."

"They blink and leave an afterimage which is similar to a strobe effect."

"They're electronic lights that spin around the rim of the car and change on an interval that matches how fast the rim is spinning, once the wheel is spinning faster than the human mind is capable of interpreting, the changing colors of lights appear as an image."

"I'm really not too sure. Out of everything taught this was what was most confusing to me in class."

"When you say compressed to describe the space where the arms of the galaxy show up, how much is compressed? Or how tightly packed does the matter in these arms need to be in order to generate star formation?" (Just enough to kick-start star formation, which is really hard to start on its own without any help.)

"Is it hard to teach a subject where almost nothing is fact?" (Wait, are you talking about astronomy? At least everything we've covered so far have been verified with evidence. Well, subject to further observations. #keeplooking)

"Can we take a field trip to see the Milky Way (or are there good viewing locations around here?)" (Just make sure the moon is not up. Then go somewhere dark and clear--I would suggest Carrizo Plain, but some other less remote, nearby locations might work.)

"I don't understand how matter isn't being sucked towards the center of the galaxy. If there's a supermassive black hole there, then what is stopping matter from being sucked towards it? I get the 'circling the drain' aspect but wouldn't everything eventually get sucked in?" (In terms of the total amount of stuff in our galaxy, the supermassive black hole is actually quite miniscule. It certainly has cleared out its immediate neighborhood and added it to its mass, but to the rest of everything outside of that vicinity, the amount of gravity from that central region is still the same whether it is a single supermassive black hole, or a cloud of gas, dust and stars. So everything else in the Milky Way goes about its business just the same.)

"Your bike is legit."

"Would you put PimpStar Rims on your car if you got them for free?" (I would add them to the lights on my bike.)

"At what location was your Milky Way picture taken?" (The Atwell Mill Campground in the Mineral King section of Sequoia National Park.)

"What is a telescope you would recommend to invest in for a broke college student?" (For telescopes, most anything you can get from Craigslist that is still functional--no sense buying a telescope new if you're just starting. But also consider binoculars as well.)

"When is our second midterm?" (In two weeks.)