"I found the car example to be really interesting. It's cool how we can relate real life things to this subject."

"How the stars can live off of helium after they have depleted all of their hydrogen."

"That helium fuses into heavier elements when it reaches a higher temperature of 100,000,000 K. Chemistry is my favorite subject and I was just very intrigued at that."

"Supernovas are fascinating because they are one of those 'doomsday' events that the sci-fi genre tends to romanticize."

"How in a binary star system, a dying star will begin 'eating' the fuel of its companion star. And if it 'eats' too quick it will explode and kill itself and its partner."

"How sad some white dwarf stars are alone. It's pretty depressing that they starve to death and die alone."

"That when medium-mass stars die they become white dwarfs, and then with a companion star go on to either become a nova or a type Ia supernova."

"The way a white dwarf can suck the hydrogen from a companion star is amazing."

"The death process of the stars, especially, the type II supernova. I did not know anything about how stars die, why they die, and what they become after death."

"Core implosion/explosion is very fun to learn about. I can imagine the outer layers of the star being gravitationally forced to crush the inner core. I can imagine that type II supernova star explosion being fairly colorful and dusty."

"I spent almost my entire high school career researching the death-cycle of stars for my senior project. WAY cool."

"That it would take forever watch something get into the black hole. And the spaghettification effect."

"I was always curious as to how black holes formed! They are just so... ominous. I would not want to get near one--they're freaky!"

"I thought this whole lesson was super-interesting, guess I'm goth-ier than I realized haha."

"Corresponding the correct end-of-life stage to the correct main-sequence star is a bit confusing at first because white dwarfs have technically low mass, but they become one after their medium-mass star depletes its hydrogen and becomes a giant that turns into a white dwarf after all its energy has been exerted."

"Why do massive stars eat anything they can to survive but smaller stars won't eat as much junk?"

"I need more explanation on a star's death and the phases the star takes as it dies."

"How it is possible for a white dwarf (with a companion star) to either flash-fuse or just simply explode. How can it do one or the other? Wouldn't it just do one every time?"

"As much as black holes intrigued me, they also confused the hell out of me. Trying to understand the physics of it all was pretty difficult."

"I'm having trouble wrapping my head around the idea of black holes--why they can't be seen, event horizons, space-time, etc."

"Why the space-time grid is always depicted as a flat surface. I just don't get we they do that. Is it to make it easier to conceptualize?"

"When talking about black holes in space, I understand that we would be able to feel a black hole because of the gravitational pull inward toward it. I'm confused about how the black hole effects space-time."

"A bit of everything since it's all so much to take in."

"Nothing particularly was confusing." 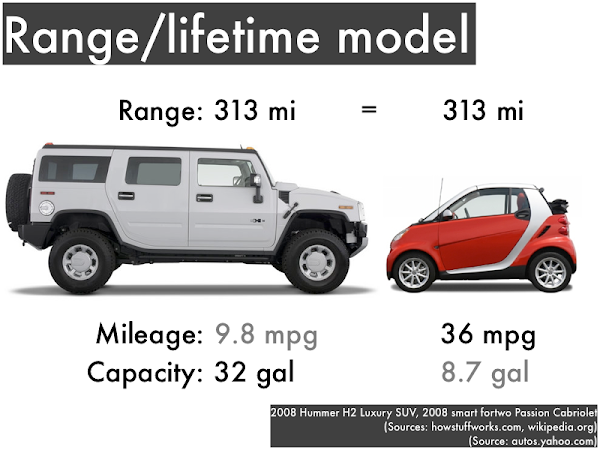 "The fuel usage for a SmartCar is way lower than the fuel usage of a Hummer, but a Hummer has way more fuel available to it than the SmartCar."

"A Hummer has a larger tank with lower gas mileage while the SmartCar has a smaller tank with higher gas mileage. These factors balance each other out between the two cars and give them both the same traveling distance."

"I'm kind of confused on how to explain this. It didn't make sense to me at all."

"Observe the world around you."

"To actually show up and attend class!"

"Question everything you thought you knew."

"Read the syllabus and get your starwheel."

"I'm not too sure. Show up early? Wear old clothes? Bring a sledgehammer?"

"A foot-measuring device is for feet only."

"I feel like this was a trick question and I searched the text for it, but ultimately just ended up confused. The first rule is to learn to the best of your abillity?"

"You do not talk about astronomy class."

"I need a lot of explanation on the main sequence stars and explosions, plus how the lifetimes work."

"Was our solar system (planets, asteroids, etc.) created by another star or from our sun? If by a different star, where is that star now?" (Anything other than hydrogen in our solar system was created by massive stars that exploded a long time ago (we don't know where those first-generation stars that lived and died are anymore). Then when our sun starting forming out of unused hydrogen from those previous stars, it gathered up the elements created by those stars around it to make the planets. #deepthoughts)

"Talk about black holes, I can't get enough."

"'Spaghettification' is my new favorite word."

"Do you like Star Wars? (Well, probably just the original trilogy. And maybe Rogue One.)"

"What is "nothing"? Can there be such a thing? I just watched '2013 Isaac Asimov Memorial Debate: The Existence of Nothing' and now my brain hurts and I'm not satisfied with the answers given there." (Now you're making my brain hurt. #deepthoughts)