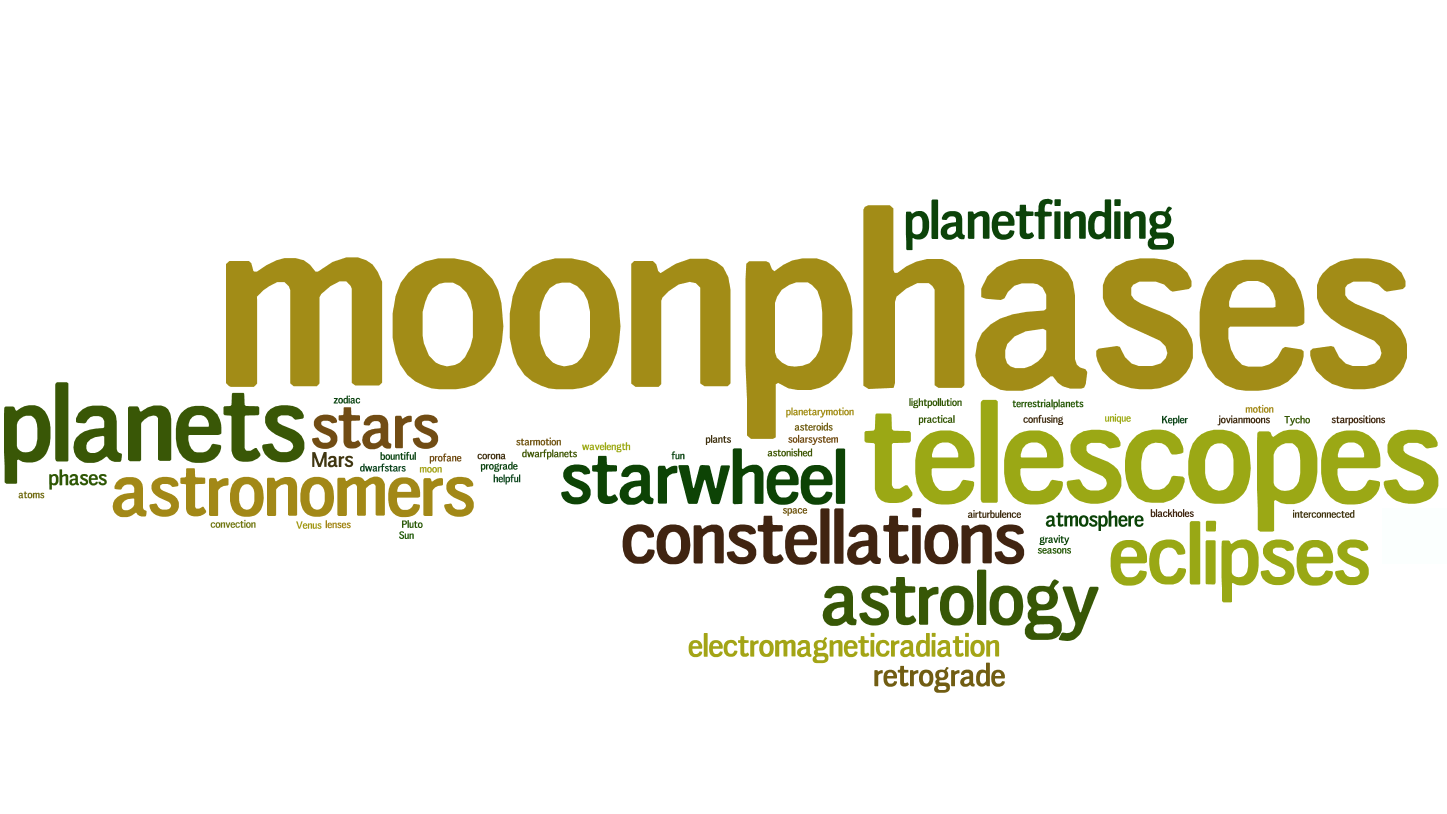 Describe your most confusing subject, and briefly explain why this subject interested you. (Graded for completion.)


"How to use a starwheel and how to locate stars, constellations, etc."

"Using starwheel and how to find constellations, etc."

"Retrograde--the way things retrograde at certain periods is fascinating because there is a cause and effect of what's going on. Evening Stars--weird how only certain stars are only visible during night time and no other time. Mercury--interesting that Mercury rises while Venus is setting, and the two planets are relatively close to each other."

"I think that probably the most interesting topic that will be covered in this exam will be the moon phases. I really enjoy seeing why the moon goes through phases, and learning about solar and lunar eclipses."

"Astrology was the most interesting for me because it is something I have dealt with very little in the past."

"I found the placement of stars and how you find them in the sky very interesting. I think this because I like how you can predict where they will be and easily find the different constellations through this. It's interesting how there is a pattern."

"Zodiac constellations because they help determine your personality."

"The planets are very interesting. The gas giants in particular fascinate me. The fact that Saturn would float."

"I believe that the most interesting subject will be the constellations and the astronomers, because I believe that there is a connection between what astronomers have discovered about them and the rest of the solar system and what's different about them today. (For example, why Wikipedia is not updated?) I also find it interesting how one's progress and development was picked up by another's to get what we know about planets today. Lastly, I think it's cool to be able to find out what true constellation I or other people have and compare them with what people believe is actually their's or mine today."

"I have to say, the most interesting thing I have learned so far is knowing how to make the diagram with the sun and earth (and of course, adding planets) , and knowing where too put the times and east and west on Earth, as well as the highest point times for the moon's phases. Because, if you know this, you can find out a lot of stuff."

"I like the starwheel because it can be used at any time."

"Finding out that I am technically not a Scorpio with my star chart and all my horoscope readings have been lies."

"The most interesting subject covered in this midterm for me would have to be the finding of planets. I think the whole concept of being able to determine if we can see a certain planet at a certain time is very fascinating."

"The most interesting subject covered in this midterm was learning about eclipses although I thought everything was super-interesting."

"Most interesting would be the starwheel since I never knew how to use one until I took this class."

"my most interesting subject was using the star wheel and learning how to locate constellations in the sky."

"I really found planetary motion the most interesting. I had never been able to understand the retrograde and prograde motions, and I like that I am now able to describe the motion to others."

"Personally, learning more about the astronomers was my most interesting subject because I have previously learned about a few of them but not in the astronomy world."

"I though light pollution was interesting because it's something I'd never thought about before, but now I'll think about it every time I look up at the sky at night."

"I like learning about the electromagnetic spectrum because I think that the concept of light waves are insane, and it's really crazy that we can see most of them but they are all around us everyday."

"I've been really interested in the history of astronomy. It's always neat to see how sciences develop and the minds that go down in history for contributing. It also humors me when people are remembered for theories that end up being disproven."

"I think the most interesting subject we're covering on the midterm is checking the moon phases during certain times of the day/month. I've always found them interesting and it's really cool to think about the perspective and where we'll be during certain phases."

"I love all the moon phases. I grew up with farmers and they always were always so interested in the moon phases for farming but I love seeing it from a different aspect and how it ties together."

"I think one of the most interesting things we discussed was planets' prograde and retrograde because although in the sky it looks like the planet is making a loop, it really only appears that way because it is passing Earth in its orbit."

"I found learning about the different astronomers and laws related to them interesting because I didn't know about a couple of them before."

"The most interesting subject for me are the moon phases and cycles. I really like that I can now identify what phase the moon is in and rising and setting times just by looking up at the sky."

"I found interesting is learning when certain planets can be seen by earth depending when its rising or setting and where it's located in the horizon. Before this class I didn't know there where such things as an evening or morning star which are constantly changing."

"Learning about how the focal length, diameter, and eye piece effects the magnification, resolving, and light gathering powers of a telescope has been fascinating. It feels like a lot of the mystery I had looked at the tool with has been stripped away, in the best way."

"Zodiac and sun signs. This is interesting to me because I learned a lot more about how accurate the signs are. I also learned that they change over time due to rotations."

"The fact that you can figure out a person's sign is pretty cool and super creepy."

"Eclipses is the most interesting subject for me because I never knew much about eclipses and I think that now I understand at least the basic concepts about eclipses."

"I'm particularly fond of the 'legit astrology' portion of the class (sun signs + rising signs) because although I do not believe in horoscopes, it is still very interesting as to how people categorize themselves with certain constellations and the position of the stars."

"I think that the different types of radiation we have found (e.g. gamma rays, etc.) is interesting. I feel like there could be more and we just don't have the tech to pick it up yet."

"The most interesting to me is astrology. I have always been interested, but think it is even more interesting that they are all off by one sign."

"I found the problem of moving a bigger planet out into the Milky Way fascinating."

"Planet surfaces, because it is cool to see and learn more about."

"I really liked going more in depth on the planets! I think it is really cool"

"The moon phases because I knew nothing about it and now given context I find out out what kind of moon it will be and when t will be rising, highest overhead, and setting."

"I really like learning how telescopes work. The interferometer is probably the coolest thing to me because I really like seeing how people creatively work around problems, and understanding how machines work."

"I think the star wheel is the most interesting subject because I think it's cool that you can find out so much from it."

"The most interesting subject on this midterm will be about the moon and learning how to tell what moon will be out in the sky 6 hours later."