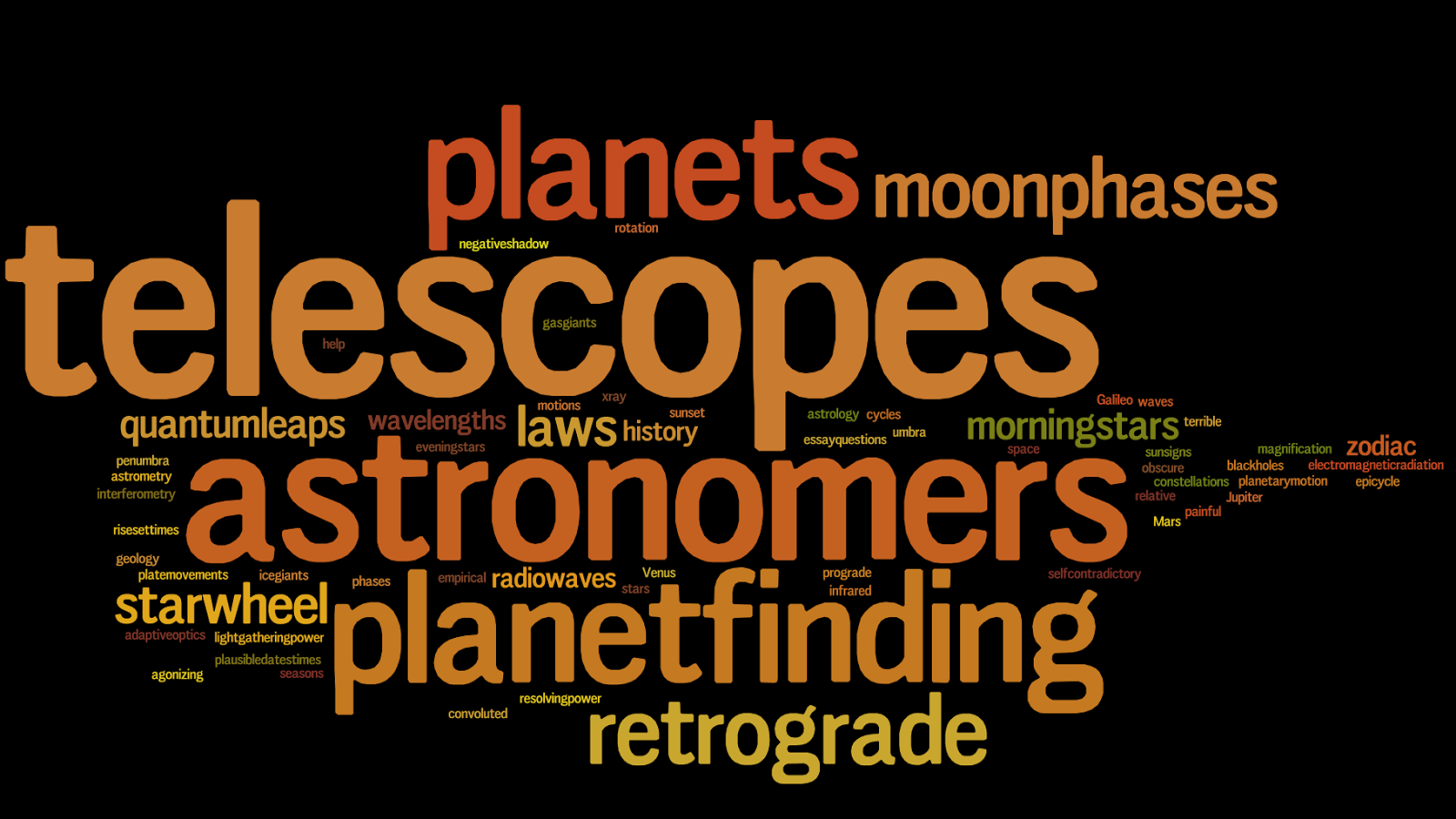 Describe your most confusing subject, and briefly explain why this subject confused you. (Graded for completion.)

"Mercury rising while Venus is setting. I don't understand why its not visible to see mercury in the sky when Venus is about to set on a regular day basis. They both orbit around the sun, so why not?"

"Retrograde motion although I find it interesting I was absent that day so I had to catch up to try and learn that concept."

"I think that probably the most confusing thing on this test will be the history of the people and what they did."

"In general, putting the skills learned together to use cohesively has been the most challenging/confusing. I think this is because it requires critical thinking in order to determine what is being asked and which specific tools to use in order to answer the question."

"The astronomers are the hardest thing for me to remember. I don't enjoy history, so anything that has to do with that, its hard for me to get it to stick in my mind. I also found the predictions of where the planets will be kind of confusing, the process of figuring it out was hard. wavelength region at the visual, radio , x-ray and gamma rays very hard to understand."

"I found telescopes to be the most confusing because it was difficult to differentiate the three different factors when deciding what telescope you should use (MP, LGP, RP)."

"Most of it is straightforward. Its just that sometimes things are hard to logic out if you second-guess yourself."

"I have trouble with both the Astronomers and Telescopes because I have difficulties memorizing or finding key words to answer the question correctly. For example, I'll think Copernicus had the first model before Ptolemy when actually it's the reverse, only because I'll double think and switch them around."

"I have to say probably differientiating between the resolving power and light gathering power. They are somewhat similar, and so what factors I think affect both actually just affects one."

"I could not quite differentiate between the resolving power and magnifying power and what physically causes one to increase or decrease. moon phases, I keep getting something wrong on them, and can't quite figure out what it is."

"The most confusing subject for the mid team was figuring out which planets are visible in the morning or evening, when trying to draw the diagram yourself."

"Learning about the astronomers and their laws was probably the most confusing to me. I did my reading on them but I feel like we didn't get to fully go over them and actually understand the differences between them."

"Something I found confusing was where would telescopes benefit the best or least."

"Remembering the cycles of continental shifting. I'm sure I will learn it but I need to work on it some more."

"I had trouble with telescopes because we did a few labs with it and a few in class activities but I'm still kind of blurry on the subject. Also, I'm not good with astronomer identification."

"It was most confusing to find the planets that will be visible in the sky. I guess because you have to really draw it out then adjust the paper so you can see what would be visible at what time."

"Telescopes, I get all the terminology confused."

"Understanding and remembering the significance of each astronomer is a little more challenging. I have a hard keeping all the laws and findings straight between the men and on a timeline, since some are fairly close to the other."

"Learning about the motions and cycles were the most confusing, because as soon as I think I have it down I am actually completely wrong."

"For me it'll be remembering the differences between all of the astronomers and what they did. There's so many of them it's hard to keep track."

"The constellations can be confusing, because the star wheel tends to be a bit complicated for me."

"Understanding how to properly use the star wheel in certain situations is difficult for me. I feel like I've gotten better but sometimes there are questions that require a star wheel and I don't see how it can be used effectively."

"I find that I have trouble with figuring out which plants are visible during the sunset/rise. This was personally confusing because I couldn't wrap my head around the changing of the times and where to draw the horizon lines."

"Honestly all the astronomers are very confusing to me. I think I spent a lot of time studying trying to figure out the difference between all of them."

"Finding rising signs and stuff because the starwheel is starting to confuse me again."

"Telescopes and their properties are most confusing to me because: (1) I missed the in-class lecture and (2) no matter how many times I read the chapter it was still confusing."

"The most confusing subject covered for me are the starwheel/zodiac questions. It took me a while to get the hang of using the starwheel to answer questions such as what time of day/year one can expect to see certain constellations. This was most confusing for me because I missed the second week of class and the in-class activities that went along with it."

"I personally have difficulties remembering names, and having to juggle a timeline as well is not my strong suit."

"Finding which planet is visible or not visible when the sun is either setting or rising. This confuses me because I'm not quite understanding how to do this. I'm getting it, just very slowly."

"I honestly thought the written portion of the exam will be the most brutal part of all. I spent my whole afternoon going over them and some of them made sense and some didn't."

"The astronomers section is the most confusing subject because sometimes it is difficult to distinguish who made which discoveries."

"Planets are very difficult for me because I find it hard to know where the planets are in the sky and what time they are visible. Not only that, but sometimes the questions themselves confuse me because I do not know what kind of answer I am trying to find."

"Remembering what effects the telescope powers will be challenging. Remembering the 'formula' for a greater LGP vs a greater MP."

"Morning and night stars, because I can never do it right."

"Moon phases, had a hard time understanding the cycling and the rise and set. A student helped me out in class with it though."

"Telescopes, because I am still not solid on what part governs what on the telescope."

"Planet hunting can be confusing because the directions are reversed and I sometimes get the times mixed up."

"Moon phases are the most difficult for me to grasp. I think i neeed to study that more."

"I really struggled with the visibility of planets depending on the time of day. This whole concept was just weird too me so I'm not too sure why exactly."

"Finding planets. there are not clear steps to take in diagraming and finding the placement of planets. Noting the time of day and observer on this digram is still fuzzy. We started out drawing a line through the sun and Earth then the process of drawing that line seemed to shift to the edge of Earth, then the are also these other lines, of the horizon I think, being drawn sometimes. I think I'm just not so practiced that I'm completely comfortable with doing it."

"Planet finding is hard for me because I still get confused about how to draw the first initial diagram given the information."

"The most confusing topic about this midterm is the law of the solstices because I know Earth is always facing in the same tilt, but I just don't understand how it changes.