The following questions were asked on reading textbook chapters and previewing a presentation on uniform circular motion. 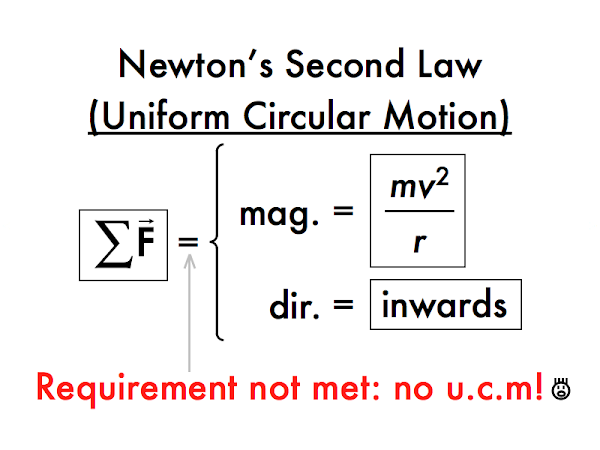 "In uniform circular motion, the direction of the net force points inwards. Newton's second law still applies as the direction is continuously changing."

"When an object is being spun in a circular motion, if released it will continue in a straight line."

"How Newton's second law plays a role in uniform circular motion, that the direction is changing. And that the acceleration is always is directed towards the center."

"Newton's second law applies to uniform circular motion. When applied to motion with constant speed the direction of the net force always points inward (which is the centripetal direction)."

"When an object is turning or going in a circle, it experiences acceleration, therefore Newton's second law applies. There is also a net force towards the center of the circle, perpendicular to the instantaneous velocity of the object, which explains why it appears to turn towards in its direction."

"The centripetal force is not actually a 'force' but it is the net sum of all the forces acting on an object that is undergoing uniform circular motion. The direction of centripetal force always points toward the center of the circle it is moving along."

"Centripetal force is not a new force but instead is the net force pointing towards the center of a circular path. The centripetal force itself can be a rope pulling an object inward or be inside of a turning car pushing someone sideways."

"Acceleration is towards the center?"

"When an object is in constant speed going around a circle, why is that according to the book we use Newton's second law?"

"I am unsure how to apply these GIF animations to centripetal force or how to use it."

"This chapter isn't necessarily confusing but I think I will need help when applying these concepts to problems, and also I will want to see the answers to the examples below because I could be totally off on that as well."

"I understood this chapter, I think."

For the "drifting" car (skidding around a circular track at constant speed), Newton's __________ law applies to its motion, and the forces acting on it add up to a net force that:

At the moment when the woman is at the bottom of her swinging trajectory (when the rope is vertical), Newton's __________ law applies to her motion, and the forces acting on her add up to a net force that:

At the moment when the motor scooter is on the left side of the screen (traveling out at you), Newton's __________ law applies to its motion, and the forces acting on it add up to a net force that:

At the moment when the car is at the very top of the loop-the-loop, Newton's __________ law applies to its motion, and the forces acting on it add up to a net force that:

At the moment when a person is at the right edge of the screen (traveling out at you), Newton's __________ law applies to his/her motion, and the forces acting on him/her add up to a net force that:

At the moment when the car is at the very top of its mid-air trajectory, Newton's __________ law applies to its motion, and the forces acting on it add up to a net force that:

At the moment when the skateboarder is at the very top of his mid-air trajectory, Newton's __________ law applies to his motion, and the forces acting on him add up to a net force that:

"I think that I am now pretty clear when Newton's first, second or third law applies. It was a bit challenging at first, but after the in-class examples it was much more clear."

"As always, it seems to be the hardest part of all of it is practicing all the concepts and examples in class. It seems like the biggest part is just understanding how to use the concepts to apply them to problem-solving. Just need to practice more."

"Good examples in the reading assignment this time."

"I still can't tell what determines if these situations are a Newton's first law or second law situation."

"I need more explanations, it's hard to determine which Newton's law applies for these situations."

"If possible, could we please review the above GIF animations very briefly for some clarifications? I am a little confused but I think I'll get it quickly with a little more instruction. Thanks."

"I feel like I got all of these wrong."

"I am confused concerning the difference between centripetal forces and centrifugal forces." ("Centripetal" and "centrifugal" merely refer to directions that point in towards or out away from the center of a circle ("center-seeking" and "center-fleeing"). Strictly speaking, they're just direction labels, like "up" and "down." The textbook is confusing in that it refers to "the uniform circular motion net force" as "the centripetal force." ¯\_(ツ)_/¯)

"It is difficult to keep the right pace in this class, I am half a week behind the schedule, meaning I am usually working on the content of last week when we are starting a new topic. I'm scared I'm going to miss something important so I just go over more stuff than we need since we don't have a lecture. It makes it difficult to catch up. :(" (The amount of material we're covering at this pace can be overwhelming to keep up with, but I'll always emphasize in class what is important, and how you'll be tested on what's important. You're not expected to know everything and calculate everything covered in the textbook! See how you do on the practice quiz in class on Wednesday; this should help you figure out where you are in terms of your studying before next Monday's quiz.)

"Is this why hurricanes are the weakest on the outside and the strongest inside? Also how would this apply to the eye of the hurricane? Also, I don't mind that you don't do lectures in class--please don't start doing more of them because for me the most helpful part are the examples and worksheets, I can always read the book at home." (Short answer: it's complicated. Longer answer: the column of warm air that rises at the center of the hurricane is replaced by cooler air that rushes in towards the center, and this where wind speed inwards and upwards is greatest; but Earth's rotation will "twist" this inflow of cooler air into the characteristic spiral. Then the warm air at the center will spiral upwards as it rises, becoming the "eye" of the hurricane--a gigantic tornado sustained by the continuous inward spiraling flow on cooler air. So basically, thermodynamics, which is still physics.)