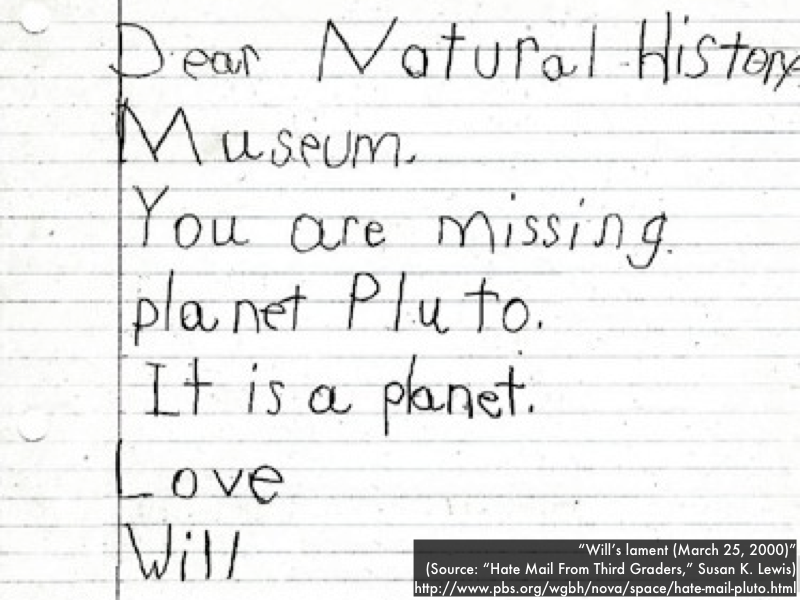 "I found that the concept behind runaway planets to be extremely interesting because I didn't realize just how differently Venus and Mars have changed and how those changes had occurred."

"I think it is really neat how Venus's volcanoes are essentially like gophers pushing themselves up until the explode suddenly. Like, goodness, the planetary conditions that support such violent and ginormous actions must be quite extreme."

"That Venus has periodically active volcanos that repave the surface."

"The differences between Earth's greenhouse effect and that of Venus and Mars."

"Learning about the greenhouse effect and how it has made other planets inhospitable for life was really interesting to me. It seems like a glimpse into Earth's future if we don't find away to reduce carbon dioxide emissions. It's also mind-boggling to me that there is still a certain percentage of the population who refuse to believe any of the evidence indicating that temperatures are rising on our planet (sad!)."

"That Mars is actually a pretty cold planet, I always thought that it was a very hot planet for some reason. I don't really know why."

"How what we call gas giants are really more liquid giants. I had always imagined them being large orbs of gas for some reason?"

"I previously thought all planets past Mars were 'gas giants', but learning that Uranus and Neptune are actually considered 'ice giants' was pretty interesting to me."

"How Uranus is colder than Neptune even though it is closer to the sun."

"That there are other dwarf planets other than Pluto. It was just something that I didn't know."

"Something I found confusing (carrying over from last class) was deciding which formations on the terrestrial planets were formed either more or less recently. Reading about the period of heavy bombardment and each planet's unique geological history has helped me understand more but I think it may take more studying before I really get it."

"I had a hard time at first connecting the dots between the mass/outgassing slides and what was in the textbook."

"I didn't know I was confused about the comparisons between, Earth, Venus, and Mars until I started this reading assignment. I found myself doing a lot of additional digging through the book and online to answer the questions."

"How to tell which features on the planets are younger/older."

"How Jupiter's belt-zones are more visible than Saturn's. I still don't understand why that is."

"Uranus and Neptune's differences, and the 'Cooper Cooler' effect.

"Pluto is small and is a different type of body, so it would not make very much sense to call it a planet, but not calling it a planet does not marginalize its position in the solar system."

"Because it fits two of the three criteria for it to be a planet; it is round, and it orbits the sun, yet it doesn't dominate its orbit, so it isn't a planet in the traditional sense, but it is a dwarf planet."

"It has the majority of the rules set forth by the IAU. It orbits the sun and has a round shape."

"Pluto orbits the sun and it is round but its orbital path isn't the same as the eight planets."

"Technically Puto is massive enough to build its spherical shape which is considered to be an aspect of a planet. It does not have enough gravitational pull to clear out other bodies near or in its orbit which would not make Pluto a planet. With these facts considered I am neutral to deciding if Pluto is a planet or not."

"It's no different than the other thousands of frozen bodies floating in its belt, considering some are slightly larger and still unrecognized as a planet."

"Not sure if it should be or not curious as to why for so long it was considered a planet but now not."

"When I was in elementary I was taught that Pluto was a planet, we need equal rights for Pluto."

"According to our book, in order for an object to be considered a planet it must be large enough to clear it's orbital region and other objects but Pluto does not do this so considering the criteria I don't think Pluto should be a planet."

"I think Pluto should be considered a planet, it always has, and always should be."

"I do think it has mostly planet characteristics, but it is really small (its moon is even almost as big as it) and isn't clear of debris so it should stay a dwarf planet."

"Because it is really a dwarf planet."

"Pluto used to be a planet, but because of IAU they have changed it. According to their classification it is not and honestly it doesn't matter much to me."

"n some level I think Pluto should be considered an honorary planet because it has been included as one in our solar system models for so long. However, since it fails to meet the IAU classification requirements the title 'dwarf planet' should be used for consistency's sake (also 'dwarf planet' is a cute descriptor)."

"I don't believe Pluto should be consider a planet because it is not big enough to dominate its orbit."

"I would have said yes Pluto should be a planet just because it's Pluto and it was weird they re-classified it, but after reading why (doesn't dominate orbit) I'm not so sure."

"I'm not sure if you want our opinion, or the scientific answer. If you are wanting my opinion I'm not to worried about wether Pluto is a planet or not."

"The astronomers and scientists needs to define a plant better. than make the concolusion regarding Pluto."

"I am neutral on this topic because mainly I don't want to piss off Pluto and have it become and asteroid that destroys us all but If these smart fellas at IAU are right about their three rule planetary ruling than I guess its safe to say that Pluto is in fact not a planet :("

"I just feel as though Pluto falls so closely into being a planet, that it might as well already be a planet. However, it still does lack some of the official planet criteria. So I think it could go either way."

"Pluto does not pass the third qualification of planets."

"I don't necessarily think that Pluto should or shouldn't be a planet. I can respect that it's a dwarf planet, but I don't think it's really fair to just kick it out of the main solar system planets because it's now a different classification."

"It doesn't meet the given criteria. It doesn't dominate its orbit. While it is round, and orbits the sun, it is lacking the one point that would make it a planet, therefore, I would call it a subplanet."

"I take no personal value from Pluto being a planet or not. I think if Pluto had a really good argument and all it wanted its entire life was to be a planet, then similar to sex changes, it should be able to transition."

"If it was a planet, then we would have to start including other dwarf planets."

"No, because it could not clear other objects from its path, not massive enough to do so. Resembles other family of icy new worlds like Eris."

"Pluto is a tiny but also a planet in our solar system! You can not count that it isn't because it's to 'small' or to far away. Its very very far but it is still there and we haven't collected sufficient data to consider it a non-planet!"

"I guess I just don't really view whether or not Pluto is a planet or a dwarf planet as that important in the scheme of issues today. However, that being said Pluto does orbit the sun, it is roundish in shape, and I don't really know if I can say whether or not it dominates its orbit. Based on those characteristics, I feel like it could easily be classified as either planet or dwarf planet."

"You can't declare a planet is a planet then revoke the title. That's like reaching adulthood and being called an adult and then someone says 'oh wait you aren't in our eyes' and then you considered a kid or 'dwarf adult.' That is not fair."

"I believe that it is still some sort of planet, but it's just a different type or even something else. If it's not a jovian or terrestrial planet, then it has to be something else or in a group beyond these 2 groups of planets."

"It is too small to be considered a planet. Especially if it doesn't have the size for its orbit."

"Can you go over the characteristics of Venus and Mars in comparison to Earth? Especially in regards to whether Venus is more/less geologically active than Earth today." (Yes.)

"Do we have to know the names of the dwarf planets, because that is something I don't have down yet." (Not really, but you should know the criteria that determines whether something should be a dwarf planet (or not).)

"What do you think Pluto should be classified as?"

"Do you think Pluto should be a planet, disregarding the 'recent' planet requirements?" (No. My philosophy is that life isn't always fair. Deal with it, Pluto.)

"I feel really unprepared for our weekly quizzes. I wish I knew exactly what to study. Too much info to remember sometimes. Practice quizzes don't help, the questions are confusing!" (Let's make sure we meet up after class and/or during office hours and we go over what/how you're studying, as this is going to be very different for different people. But good on worrying about this now.)

"Are we going to have a review day for the midterm?" (Yes, we will.)

"Planets are so fascinating and so interesting to study about. Can we stay in this chapter forever?" (But then we'll never get to studying about the stars, galaxies, the big bang theory, and possibility of extraterrestrial life!)

"Why is it that cow farms are never mentioned as a primary methane contributor?" (Well it has been reported in the media that the cattle industry does make a sizable contribution to the total amount of greenhouse gases introduced into the atmosphere. Not as much as fossil fuels, though, but still significant.)