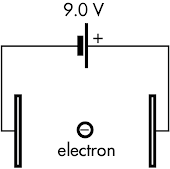 An electron is placed between the plates of a charged capacitor connected to an ideal 9.0 V emf source. Discuss whether the electron should move to the left or to the right between these plates in order to increase its electric potential energy. Explain your reasoning by using the properties of capacitors, charge, electric potential, and energy.