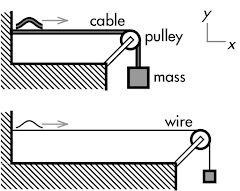 A transverse wave pulse is created by plucking one end such that it travels down along a cable or a wire. The cable and the wire are made of the same material, but the cable is thicker than the wire. The cable is shorter than the wire, and has more mass hanging off the end. Discuss how it is possible that waves could travel with the same speed along the cable and the wire. Explain your reasoning using the properties of waves.