The possible effect of recoil on an airplane is described[*] below:

Affectionately known as the "Hawg," the A-10 Thunderbolt II is essentially a flying gun designed to provide close air support to troops on the ground... An old rumor that a reader recently asked about is the A-10's gun is so powerful that when fired the recoil slows the plane down almost to a complete stop....
The myth that its cannon drastically decelerates the aircraft is pure "Hawg-wash," said retired Air Force Col. Steve Ruehl. "I have fired as many as 500 rounds in one trigger burst..." 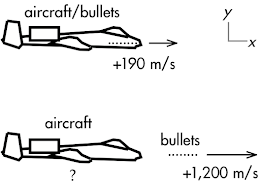 The mass of the aircraft[**] is 2.30×104 kg, and the combined mass of 500 bullets[***] is approximately 200 kg. Assume that the aircraft (and bullets inside) are initially flying horizontally in the forward direction at a speed of 190 m/s, and then 500 bullets are fired all at the same time with a speed of 1,200 m/s out from the front of the aircraft (as measured by an outside observer). Ignore the effects of friction, drag, and the thrust of the aircraft engines (assuming that aircraft is just gliding) during the brief amount of time that the bullets were fired. Find (a) the final speed of the aircraft after firing 500 bullets (all at the same time); then (b) discuss whether the claim that "the recoil slows the plane down almost to a complete stop" is plausible. Show your work and explain your reasoning using properties of collisions, energy (non-)conservation, and momentum conservation.