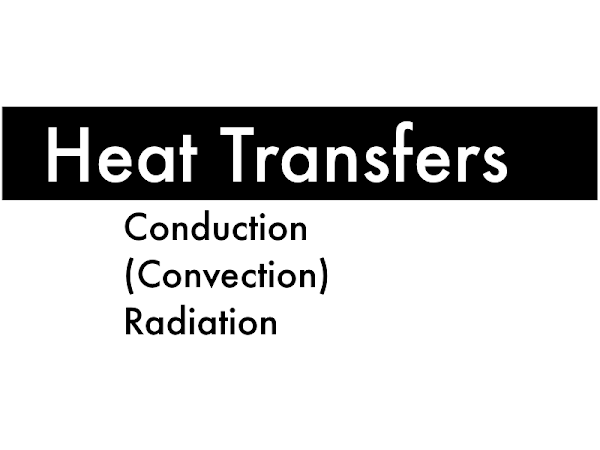 In a previous presentation, we considered what happens to an object when heat is transferred into, or out of it. Here we will look more closely at the transfers themselves, that is, how thermal energy is transferred. 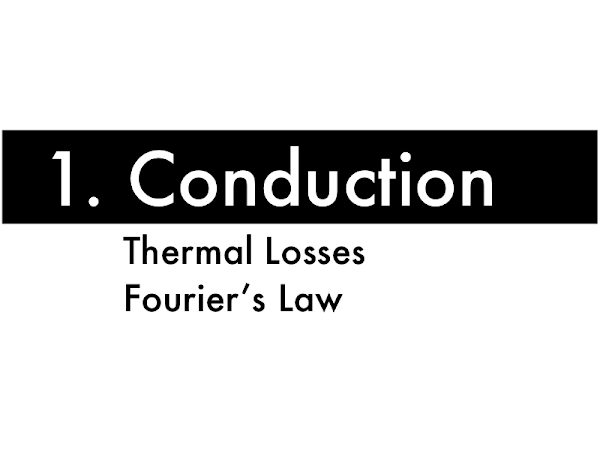 First, conduction, where heat is transferred through an object. 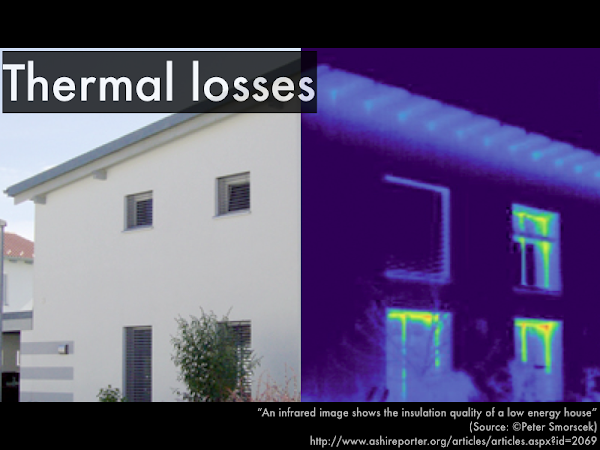 The power (amount of heat conducted per time, in units of joules/second, or watts) through a wall is proportional to the temperature difference ∆T on either side (as per the zeroth law of thermodynamics, heat flows from high to low temperatures), and inversely proportional to the thermal resistance R of the object, which is a measure of how difficult it is for heat to flow per time through it: 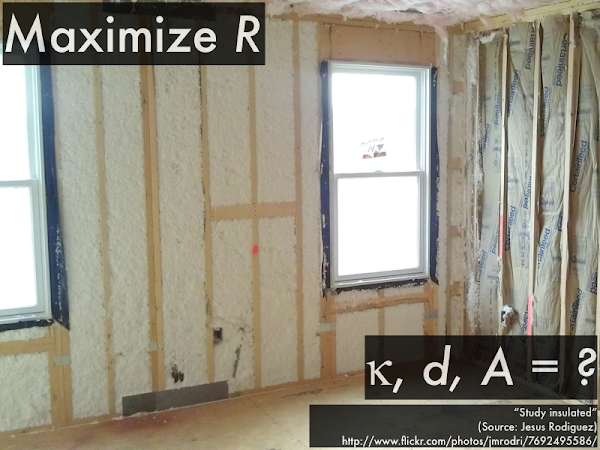 In order to minimize the amount of heat flowing per time through these exterior walls, the thermal resistance R of the insulation installed should be maximized--by having a large or small conductivity κ value? A small or large insulation thickness d? Should the walls be constructed with a small or large surface area A? 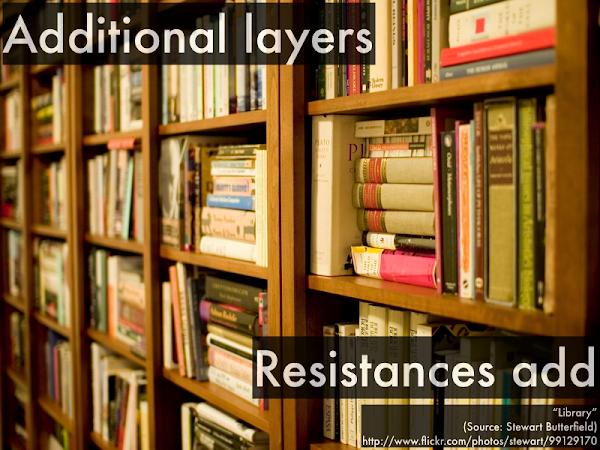 If an additional layer is added to existing insulation, such as this wall-spanning bookcase full of books, then the overall thermal resistance of the bookcase and insulation layer in the wall would be the sum of their individual resistances:

where presumably the shared area A of the wall and the bookcase is the same value, but they have different d thicknesses and κ conductivities. The resulting power (heat flow per time) through the book layer and wall insulation is then: 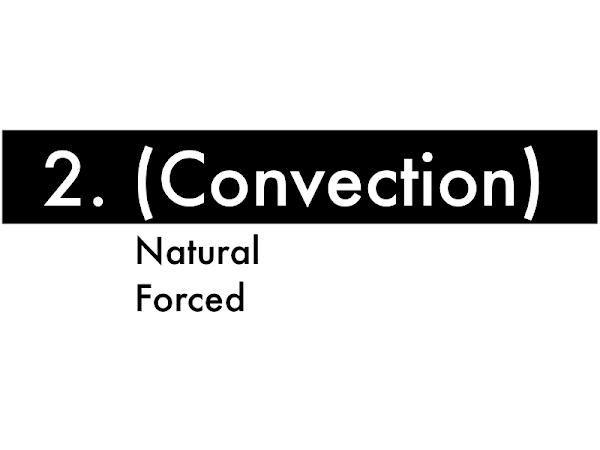 Second, convection, the transport of heat via circulating air. We will just discuss this qualitatively, in contrast to conduction and later, radiation.

Natural convection is where a fluid (liquid or gaseous) will circulate and transport thermal energy from a high temperature to a low temperature region (again, the zeroth law of thermodynamics). In this lava lamp, there is a light bulb heating up these wax globules from below. As the wax globules heat up and expand, their density decreases relative to the clear solvent, and subsequently rise upwards. At the top of the lava lamp, the wax globules cool down and contract, such that their density increases relative to the clear solvent, and subsequently begin to sink. Notice that thermal energy is not being conducted from bottom to top through a static substance, it is being "carried" within the rising globules. (Video link: "080913-1050512.") 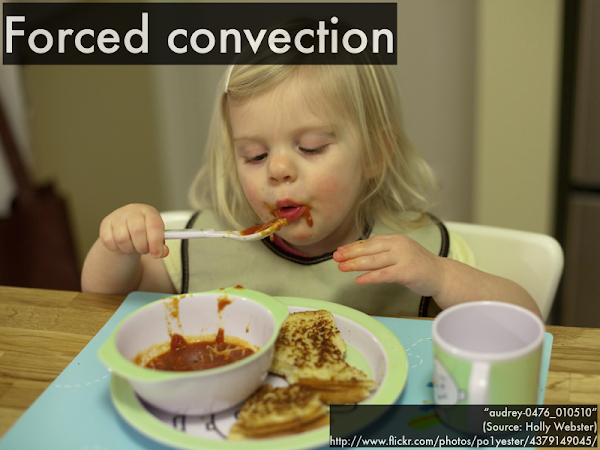 You can also transport thermal energy via forced convection, where instead of the fluid circulating naturally due to relative changes in buoyancy, it is forced to carry off thermal energy, typically by blowing across the surface of hot soup. 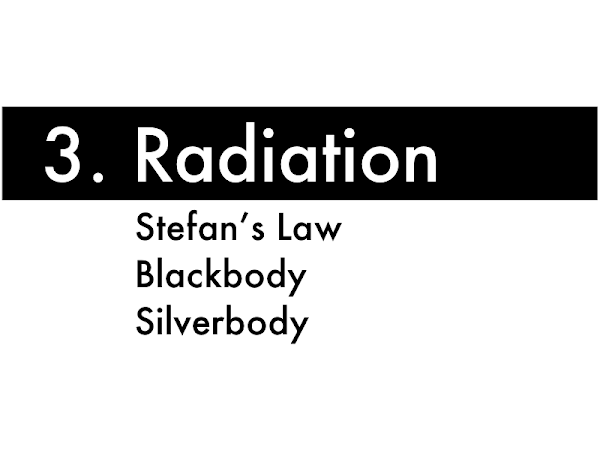 Third, radiation, where heat is transported in the form of light.

Stefan's law of radiation quantitatively describes the power, or net amount of heat transferred in the form of light to/from an object, which is depends on the difference of the fourth powers of the object's surrounding environment temperature and the temperature of the object itself (in kelvin), the total surface area A of the object, and the emissivity e of the object. Note the obligatory numerical constant σ. 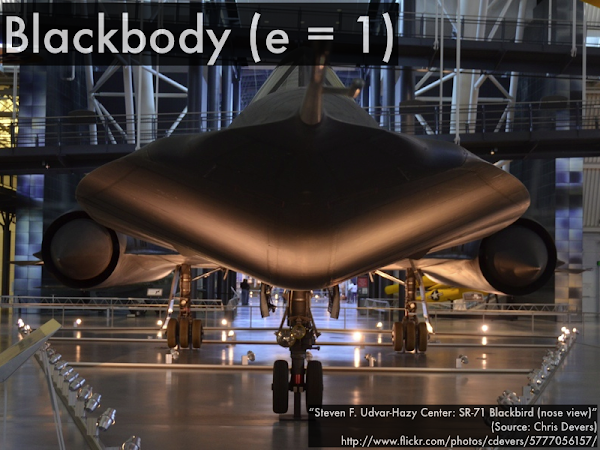 In contrast, a silverbody is an object that is good at reflecting light (and poor at absorbing heat in the form of light). Again, radiation is a two-way street, so an object that is poor at absorbing heat will also be poor at emitting heat. Here this early NASA communication satellite will efficiently reflect light, but will also be very inefficient at radiating heat should it get too hot. A perfect silverbody has an emissivity e = 0. 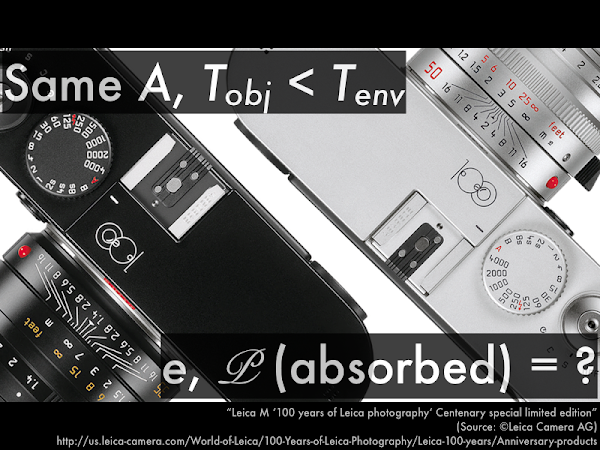 For these two Leica M cameras, if they are both cooler than the surrounding environment, both will begin to heat up by absorbing radiative heat (say, from the sun). Which will have a faster rate of heat absorbed per time--the black model, or the silver model? 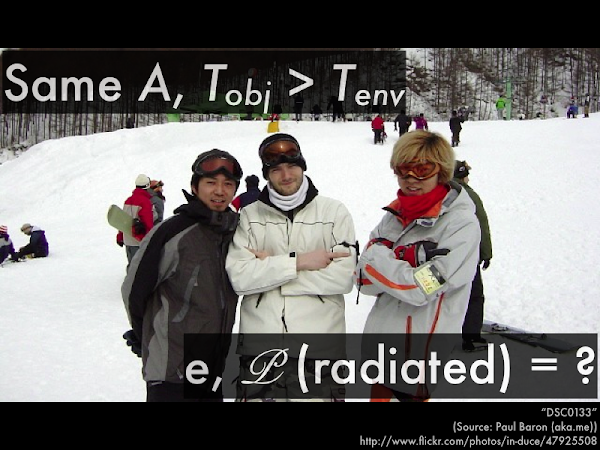 For these snowboarders, if they are warmer than the surrounding environment, they will begin to cool down by emitting radiative heat (say, to the overcast sky and the snowy landscape). Which snowboarder will have a faster rate of heat radiated per time--the snowboarder with the black jacket, or the white jacket?
Posted by Patrick M. Len at 10:59 PM