The following questions were asked on reading textbook chapters and previewing presentations on the history of the Milky Way and big bang clues, a comic strip adaptation of of Neil deGrasse Tyson's "The Most Astounding Fact" 2008 interview for TIME magazine, and Minute Physics' video explanation of Olbers' paradox. 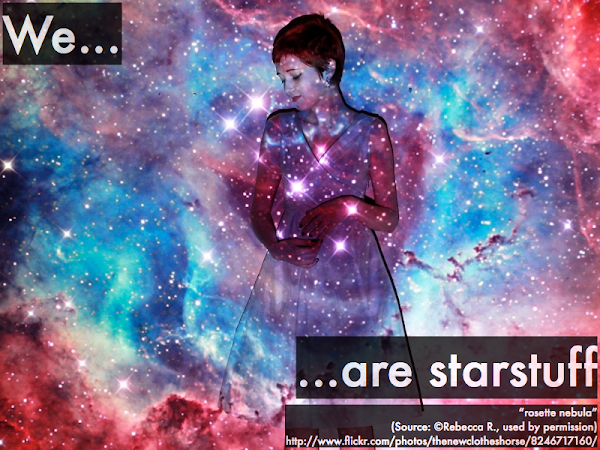 "The fact that older stars born a long time ago will be metal-poor, it doesn't confuse but rather makes sense as the older stars will not have hardly any metal to speak of other than the little amount they have themselves while newer stars are born into a rich metal landscape."

"That the atoms in our bodies come from stars."

"That space is dark because of the redshift of stars moving far away."

"The fact that we live in the remains of the big bang is awesome. I used to picture the big bang as occurring in a particular place, but reading the textbook helped me understand how wrong that notion is."

"'The universe is inside us.' I thought that my high school teachers were just saying we were made of stars to keep our interest. But I guess its actually true, in a way."

"How we are technically looking at super-super-old light through telescopes. It's a little confusing though."

"I'm super-interested in the expansion of space without the actual movement of the galaxies because I previously didn't understand how all galaxies could be moving away from each other. This made me science-happy."

"Olbers' Paradox is really cool it really solidifies the beginning of the universe since some light hasn't reached us yet. It's crazy."

"Bottom-up model versus the monolithic collapse model because I can't conceptualize the idea of it all."

"The whole idea of metals being the way we found out how old the universe really is was kind of confusing because what started this process of metal fusion and supernovas in the first place?"

People breaking up a relationship are most likely to update their Facebook status to "single":
Ask the instructor an anonymous question, or make a comment. Selected questions/comments may be discussed in class.

"How can we possibly map out our Milky Way galaxy with all the dust we would have to look through?" (We just need to look at infrared and radio waves, which easily pass through interstellar gas and dust.)

"You're most likely to see 'single' FB status updates a few days before the Mid-State Fair starts during the summer."

"When we die, will the some of the atoms from our body ever go back into space and be part of stars again or will they all remain on Earth?" (They will all remain on Earth. Unless you launch your body into space, or wait long enough for the sun to swallow Earth up as a red giant, and what remains of Earth dissipates outwards as the sun goes through its planetary nebula phase.)