A brick can be placed in either of two orientations. The bottom of each brick is immersed in 20° C water, while the top of each brick is heated to 80° C. (Ignore the very slight thermal expansion of these bricks.) Discuss why these two bricks will not conduct the same amount of heat per time. Explain your answer using the properties of heat, temperature, and heat transfer. 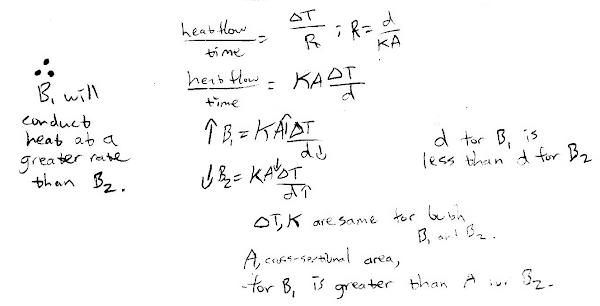 A sample "r" response (from student 0825), discussing only how the cross-sectional area A affects the flow of heat conducted through the bricks:

A sample "r" response (from student 1025), discussing only how the length (height) d affects the flow of heat conducted through the bricks: