"The different kinds of spectra. I hadn't heard of them before."

"Kirchhoff's laws were interesting because I did not know anything about the three different types of spectra."

"The Doppler effect video was interesting to me because when the car horn had started at a normal note and then all of a sudden you here the car going fast and it changed the pitch/frequency of the car horn, I found cool how sound can be affected by the speed of that source."

"I love the Doppler effect, it was my favorite part of the astronomy class I took in high school. And getting to revisit it was super fun."

"The Doppler effect. Now I know why the sound of a firetruck changes while moving closer/farther away."

"I think the Doppler effect is something fascinating, and also very logical. I have had it explained to me in the past, but never understood it so well because I didn't know about wavelengths. However, that being said, I now have more questions."

"I remember learning about the Doppler effect, but forgot that it had a specific name until now."

"That the Doppler effect is used to measure the speeds of blobs of gas in the sun's atmosphere. I didn't think this type of measurement was possible/existed."

"Nothing really stood out in particular."

"The three kinds of spectra were not so clearly explained, I thought. Still having trouble grasping, not only how to differentiate them, but also what causes them."

"I feel like learning about the spectra it was confusing to me because there isn't much information about them other than what it is. It would make it less confusing if there were more examples about the absorption, emission and continuous spectrum types."

"It's a little hard to remember which spectra correspond with which sources."

"I'm completely lost when it comes to spectra. I am just lost."

"I found understanding the different spectra to be slightly confusing, I feel like a little bit of explanation with examples would be really helpful."

"I need more practice identifying the type of spectrum a light source produces."

"The Doppler effect is confusing."

"Blueshifts and redshifts are confusing. I'm unsure what their relevance is."

"I think Pluto probably shouldn’t be a planet if scientists recently discovered it doesn't align with all the qualities of a planet but at the same time it acts similar to a planet."

"Pluto should not be a planet because it does not fit the requirements to be one."

"I'm not totally sure. I feel like my explanation has something to do with the size of Pluto. Meaning one of the reasons its not included as a planet is because its to small. I don't completely think that should be the only factor when classifying a planet."

"I do not have a strong argument other than Pluto is not massive enough to clear out other bodies in and near its orbit."

"I still don't believe Pluto should be considered a planet based on the IAU classifications. Yes, it is true that Pluto was a planet until it was kicked out in 2006; however, we are wrong about science all the time. I mean look at how Ptolemy incorrectly defined retrograde--that's just what people believed during that time. We've incorrectly defined objects as planets all throughout our history, but we live in a different time now. I personally don't understand why people get so emotionally invested in Pluto not being a planet anymore. Maybe they can identify themselves with the DWARF planet (planet is technically still in the name, calm down people)."

"With Pluto not being considered a planet just because it doesnt meet one of the requirements of what makes a planet, which is how its not able to clear the other planets around its orbit. I still think it should be considered a planet."

"Pluto is cute. It's considered a 'dwarf' planet. I believe all planets, whether dwarf or other wise, should be counted in terms of our family solar system."

"It is not a planet according to current criteria. But it will always have a special place in my heart."

"I go neutral since there are certain requirements to classify a planet."

"Such a thing isn't for me to decide."

"Pluto should not be a planet because it does not dominate its orbit. It shares its orbit with a bunch of meteors and other dwarf planets. If we classify Pluto as a planet we have to classify all of those objects as planets."

"I recall us talking about how there is plenty of other objects close to Pluto that resemble its same size and shape. It seems pointless to classify it as a planet without doing so for similar objects."

"Pluto did not meet all of the requirements to be considered a planet like orbiting the sun, spherical, do not orbit other bodies."

"It hasn't cleared its neighboring region of other objects. It doesn't meet all criteria."

"Classification is important, it gives the collected data context."

"Just because Pluto isn't full-sized and has issues with its orbit, doesn't mean it shouldn't be considered a legit planet. A dwarf planet is still a planet with an orbit in a solar system."

"Even though Pluto is in the orbit around the sun, has enough gravity to make itself round but can't 'clear its neighborhood' of smaller orbits around it, I think it's okay for it to be a dwarf planet."

"To me, just like everyone's different down here, all the planets up there are unique."

"I disagree, because given a set of definitions of what a 'planet' is (and definitions are important!), Pluto doesn't check all the boxes. But to those who are still nostalgic and want Pluto to get the respect they think it deserves, i say this: 'Pluto is still a planet...it's just a dwarf planet.'"

"As we discussed in class, because Pluto is not able to dominate its orbit it cannot be a planet."

"Due to the 2006 updated definitions of a planet, Pluto does not count as one. but is instead a dwarf planet." 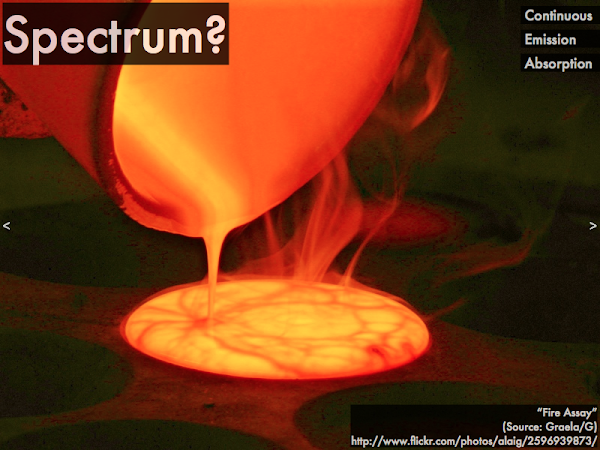 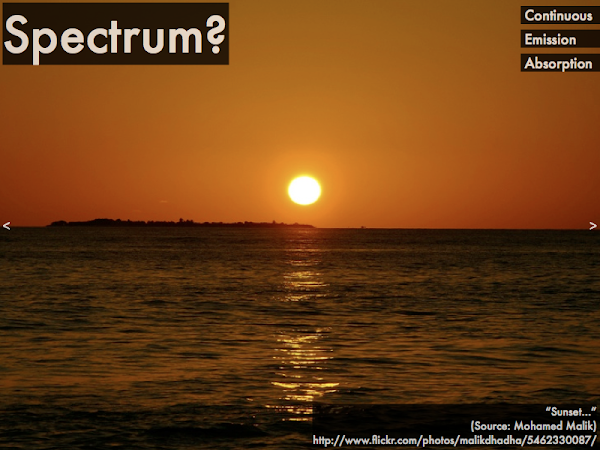 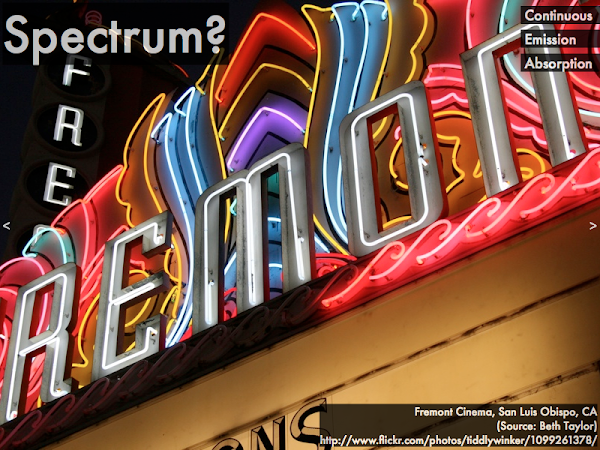 The lights atop the Fremont Theater in San Luis Obispo, CA, produces a(n) __________ spectrum, which appears as a: 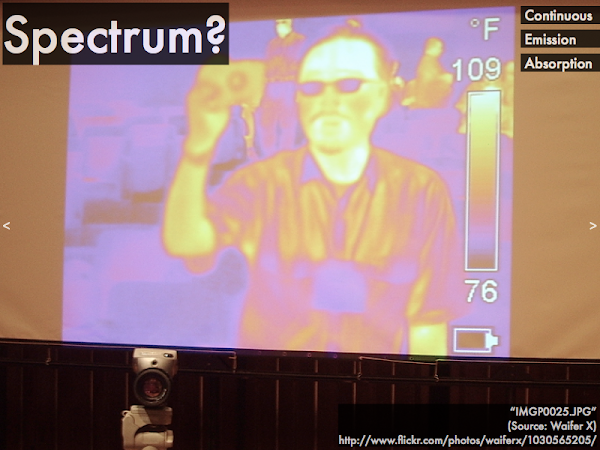 "Can you give us more examples of when spectra would apply to astronomy, and how to tell the difference between absorption, emission and continuous."

"I would like more explanations on type of colors given off by the three different spectra types."

"How are quantum leaps related to Kirchhoff's laws? ...Or how are quantum leaps related to different spectra?" (If electrons are jumping down to lower energy orbitals, then they will emit various photons that will correspond to the different colored lines in an emission spectrum. If electrons are absorbing photons to jump up to higher energy orbitals, then the various photons that they absorb will correspond to the missing colors (dark lines) in an absorption spectrum.)

"I'm not a huge fan of The Big Bang Theory TV show either."

"If you got honked at, would you think about the Doppler effect?"

"I actually really enjoyed the car horn video because we hear car horns or sirens on an almost everyday basis, but we don't really think about the reasons behind the changes in loudness and pitch."

"Understanding the light source of the star is a bit confusing. I don't understand how the light goes from continuous to missing sections of colors in absorption. Are the outer layers acting as sort of a filter for the continuous light at the core?" (Yes, exactly.)

"Thank you for posting sample midterm questions for us to practice, as well as how many questions were from previous quizzes. Those helped me study a lot."