"The age of this world; I think that it's interesting Earth has been through many stages."

"That chemical evolution is not considered being alive even though it should be. It is creating something or changing something which makes it seem alive."

"Your pictures are cool because it helps me to visualize what we are learning about and I like that."

"The timeline of Earth, and when life starting appearing, because it is really mind-blowing to see it on a timeline."

"Learning about carbon molecule chains was really interesting. The fact that all the information needed to survive and reproduce is stored on those simple chains is sort of mind-boggling."

"Possible life on other planets because I believe it's kinda scary."

"Origin of life on Earth. Its interesting because it has brought much debate from the science and religious societies."

"The definition of life is interesting. Thinking about life in the way that it does versus what it is."

"I find the history of life on Earth very interesting and the fact that we are such a small part of our history as a planet, yet we will probably be the ones to destroy it, very sad."

"I'm super-interested in the idea of intelligent life throughout our universe, such as traveling between the stars, it's crazy that the fastest human device launched will take about 90,000 years to travel to the nearest star."

"There is an equation for finding the number of communicative civilizations in our galaxy."

"I really enjoyed learning about the Drake equation because though there is no way of using it currently, it is interesting to hear that there is an active search of other advanced life and that it is thought of as a serious possibility."

"I definitely thought that the Drake equation was very interesting. I did not know that it was possible to even form such an equation, yet here it is! I love it."

"I've always found extraterrestrial life interesting and think that it would completely change our lives and culture if we actually were able to converse or communicate with what's out there."

"That this is our last lecture."

"I don't understand the timeline you inserted. Like why? What does it mean?"

"I didn't really understand the process in which Julia Child went through to describe the how life on Earth begun."

"I am so CONFUSED of how we haven't been around for that long."

"Traveling between stars because of how long it seems to take to get to each one."

"Carbon molecule chains. 'In order to do things that livings things do, and more importantly, to make sure that a future generation is able to continue doing these things requires a lot of instructions to be stored.' MIND BLOWN."

"I was confused on the chemical evolution portion of this assignment. I thought it was really hard to grasp the idea of things naturally joining together in the fact of adapting to certain area's around Earth. Thus, evolution."

"How the chemistry works with molecules, this is confusing because I need it to be explained since for me chemistry is hard."

"The Drake equation was really confusing for me. I don't know how exactly all those variables are expressed or how they constrain the probability of life in a real sense."

"As usual, the thing I find the most interesting is the same thing that confuses me the most. I do not know what makes up the Drake equation, or how someone even came up with it."

"Living things are organisms that are made up of atoms and cells that allow life to move and talk and feel. Inanimate and non-living objects cannot do this."

"A living thing has to be able to adapt in the environment but dose not have to if it is non-living."

"Living things can adapt themselves and their surroundings to accommodate survival, non-living things may last for centuries, but could eventually fade away."

"Life is the ability for cells to grow, develop, manipulate its environment, and have future generations while non-living things have no live cells."

"I feel like Earth is the only place where people can actually survive. It would interesting to know what new discoveries scientists would make but it's not like it would benefit me in anyway. You know what I mean."

"I just want to verify that there are other living organisms in the universe, even if this is as simple as a single-celled organism. Only because that organism can evolve just like we did."

"Because it'd be cool to know of other life forms and see how they live and see if their lifestyle is better than ours."

"Life elsewhere scares me. You don't know if they're gonna be friendly or not."

"I think that there's no way that we are the only living things in this universe, or anywhere other than Earth. It's interesting to think about what it may be, it's (probably) not little green aliens in a flying saucer, but who knows?"

"I think it is important because I don't think that we are alone. Knowing if there is life on other planets could help us answer a lot of questions that we have about our galaxy and may help us with things we are trying to research and fix."

"Other life forms could possibly inform us about how our universe was created, or how life itself has turned into what we know today. finding other organisms would be a huge development in human existence."

"Knowing that there is life elsewhere doesn't change my daily life here."

"I struggled between selecting 'somewhat important' and 'important.' I think that life elsewhere could potentially help but I'm not sure to what extent."

"We are wired for discovery and the fascination of being able to prove life elsewhere is something humans will strive to learn."

"My own personal reason would be existence and the meaning of it. I sometimes go down the rabbit hole of intense thought surrounding this. If we found out that there was life elsewhere I believe it would provide some comfort to me knowing that we aren't in this alone. Not necessarily that there's a purpose to all this but it might create more meaning to our own existence."

"There is no way that we are the only living beings in the universe. I want to know what else is out there."

"Although not totally unimportant, right now it does not affect the way I live."

"It would be very important to know if there was life on other planets or further in the universe. This mostly is because of the natural feeling we get as humans wanting to know more and more in life and where people and living being exist at."

"I love aliens, I love X-Files, and everyone needs to know that life beyond Earth life is important and cool and amazing. The truth is out there."

"Massive stars, because they have a very short life span so they wouldn't be very likely for life to exist on a planet around them."

"It would take about a billion years or so for life to develop elsewhere and massive star wouldn't live that long."

"Because a massive star dies too quickly."

"Massive stars would have the lowest chance of hosting life because they would offer the shortest window of time for life to form because of its shorter main sequence lifetime."

"A low mass star would more than likely not be able to generate enough heat to create life on a terrestrial planet."

"Medium-mass stars would most likely have a planet with complex lifeforms because they wouldn't die as quickly as massive stars, and not be as dim as low-mass stars."

"I don't think any of the stars would have life."

"Wouldn't all of them be unable to have complex forms of life? Since that would be my answer, and it is not even an option, I am wrong and confused lol."

"A serious look at the possibility of life elsewhere in the Milky Way."

"It is a equation used to figure out now many extraterrestrial intelligent civilizations are out there that we can communicate with in the Milky Way." 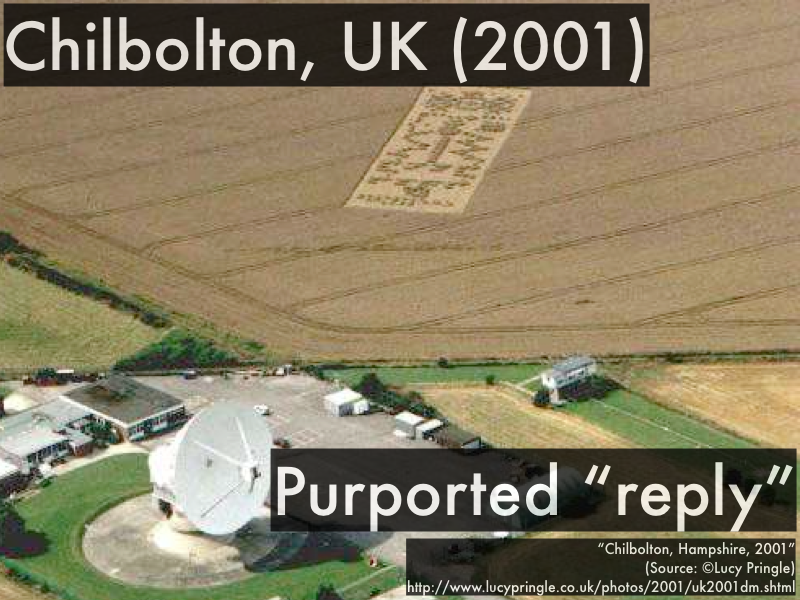 "Do you believe in extraterrestrial life?" (Eh, maybe. We won't really know unless we keeping looking, though.)

"How long do you think it will take most people to do the final exam? (About the same amount of time as a midterm, anywhere from 15-80 minutes, although you are allotted 120 minutes to take the final.)

"Do you think it's plausible that the Chilbolton message is a reply?" (Yes, it's a reply from the radio astronomers who work next door to that field. #mischiefmanaged)

"I'm really enjoying this class." (Now that it's nearly over?)