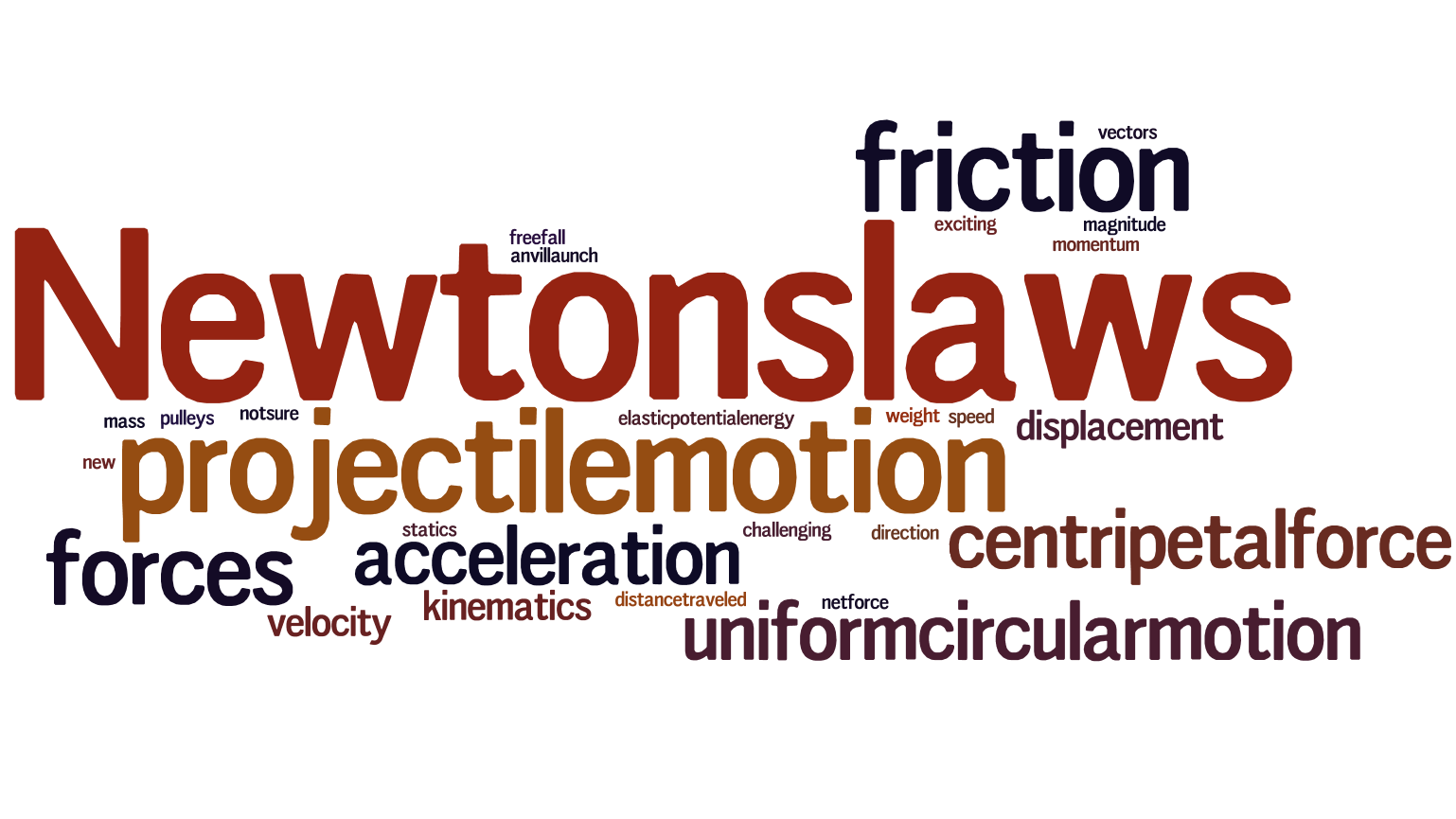 Describe your most interesting subject, and briefly explain why this subject confused you. (Graded for completion.)


"Maybe uniform circular motion, because it is harder to understand compared to all the other subjects, the forces act differently."

"None is particularly that interesting."

"Centripetal force is the most interesting as I never once thought there was a pull towards the center of any circular motion."

"Projectile motion because I ride mountain bikes and use this conceptually every time I jump down a trail."

"Newton's laws were the most interesting because they apply to other classes that I am taking."

"Projectile motion because it can be applied to everyday life."

"I find it interesting that things hit the ground at the same time when one is dropped versus the other being horizontally moved somehow. not always the case im sure but its interesting. I go to the range with my grandpa and shoot guns and for some reason it makes me think of bullets and when they will hit the ground in a way. Not exactly the same type of thing im sure but yeah. The most interesting subject for me in this class so far is anything that has a strong, easily perceptible application to a real-world situation. Abstract mathematical physics problems are not only boring to me, they become useless when I don't really learn them - which is what happens when it is difficult to translate what is happening in the equation/problem to real life."

"Newton's second law of uniform circular motion is pretty interesting to me because it's not as intuitive as some other concepts."

"I found that the labs were very interesting, but that's about it."

"Learning that it takes more force to get something moving than it does to keep it moving was interesting because I had never thought about it that way before."

"The most interesting subject to me so far is projectile motion. The idea of an object free falling and eventually reaching a constant terminal velocity was hard to grasp for a second. It was interesting to think that if you free fell from a certain height, even a mile higher you would not hit the ground any harder."

"Stiction is by far the most interesting aspect of this unit for me. Different materials have different static friction coefficients, which relates directly to molecular bonding and partial charges."

"I think the using the forces were most interesting to me because I like the idea of biomechanics."

"I think that uniform circular motion was the most interesting because it is one of those things I never really thought about how it worked before and now it makes sense."

"I personally like projectile motion because the ability to calculate the path of a thrown object is very helpful as a programmer with an interest in games."

"I thought that uniform circular motion was fascinating; something that I was able to observe in the real world was finally explained. The practice problem involving water in a bucket was especially interesting, as it tied net force and normal force together in a new way that was especially great for a visual learner like myself."

"I feel like the projectile motion will be the most interesting to me, because my brain works on seeing things that way. I am currently learning how to fly airplanes and this is one thing that we constantly have to take into consideration especially as we are climbing to avoid obstacles or coming in to land."

"Circular motion, because its applicable in many real-life situations."

"I find suspension and the forces that are involved in suspension to be interesting. I think the reason is because I am highly afraid of elevators so it's interesting to see how they work regarding physics."

"Vectors--due to a failure in the online enrollement system, I finished all my engineering classes before doing any physics, I loved working on vectors and tension."