The following questions were asked on reading textbook chapters and previewing presentations on electric forces and fields. 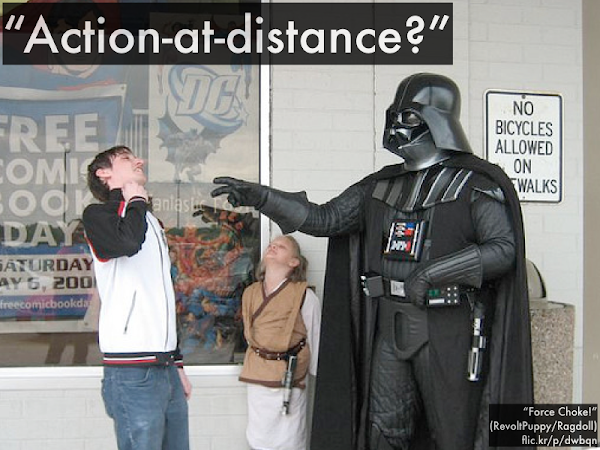 "That an electric field is depicted as filling in all space surrounding a source charge."

"A source charge is one that exerts force on a test charge, and the force is attractive if the two charges have opposite signs."

Coulomb's law calculates the magnitude of the force that source charges exerts on test charges separated by a distance r. In this calculation the sign charges do not matter when calculating magnitude of force. The constant k also cancels out the units and convert the units to the proper units of newtons."

"I didn't find anything particularly confusing about the material, I just would like to see some problems worked out in class."

"I'm having difficulty applying this to real life."

"Charges and electric fields and forces."

"The physical representation of an electrical field--like, what is it? I understand that it is the force on an electric test charge divided by the tea charge itself, but I am having a hard time visualizing what a field represents."

"The concept of the electric field."

"What I find difficult is remembering what all the letters and symbols mean. There are just so many that it's hard to remember which one is which and what it means. I just need to put more work into this class."

"Not sure what the difference is."

"Electric force is the force applied by the electric field onto an object."

"Electric force is when an object exerts a direct force on another object. While the electric field is created by an object and the electric field exerts the force on the other object. I totally felt like there was a difference when I was doing the reading, but now that I'm typing it out they seem like the same thing except that a field spreads out in all directions."

"The electrical field is what a source charge creates around itself, and this is where the electric force comes from when applied to the test source."

"I'm still a little confused on this."

Explain the conceptual difference between a source charge (±Q), and a test charge (±q).

"A source charge exerts the force and the test charge reacts to it."

"I honestly do not understand the difference between a source charge and a test charge."

Indicate the direction of electric field lines for these ±Q source charges:
(Only correct responses shown.)

"From lab when we illuminated the CD tracks with a laser: (a) Why don't we see a series of dots? (b) Isn't the width of the laser wider than multiple tracks on the CD? (c) Also why don't we see any light between the dots?" ((a) You are seeing a series of dots (maxima) in different directions, but the maxima θ angles are quite large. (b) The laser needs to illuminate many multiple tracks on the CD such that light will pass through them like passing through multiple slits. (c) You don't see any light between the maxima dots, because between the maxima θ angles are the minima θ angles, where destructive interference occurs.)

"I can't wait until we all evolve to have superpowers." (Then life would become boring, like the TV show Heroes.)

"My brain hurts. Conceptual stuff is not my thing."

"I can't wait for this semester to be over!" (Me, too. #squadgoals)