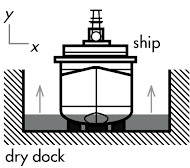 A cruise ship rests on the floor of a dry dock with a small amount of water. As the water level rises (but not enough water to "float" the ship yet, so it is still resting on the bottom of the dry dock), discuss why the normal force of the floor on the ship decreases. Explain your reasoning using the properties of densities, volumes, forces, Newton's laws, Archimedes' principle (buoyant forces), and free-body diagrams.