The Federal Aviation Administration (FAA) tested a runway material that would slow airplanes to a stop in emergency situations where they would go past the end of a runway.[*]

Without use of brakes, or reverse thrust an FAA Boeing 727 [mass of 95,000 kg][**] overran the runaway at 28 m/s. The aircraft came to a full stop in 80 m, with passengers [inside the plane] only exposed to roughly 1 "g" [10 m/s2] deceleration. The computer model accurately predicted the performance of the final outcome within [six percent].

Determine whether or not the 1 "g" claim for the magnitude of the plane's acceleration is within a 6% error of its actual value. Show your work and explain your reasoning using properties of constant acceleration motion along the horizontal direction.

A sample "p" response (from student 1220), comparing the claimed and actual stopping distances:

Another sample "p" response (from student 6584), comparing the claimed and actual acceleration:

Yet another sample "p" response (from student 6674), using the work-energy theorem: 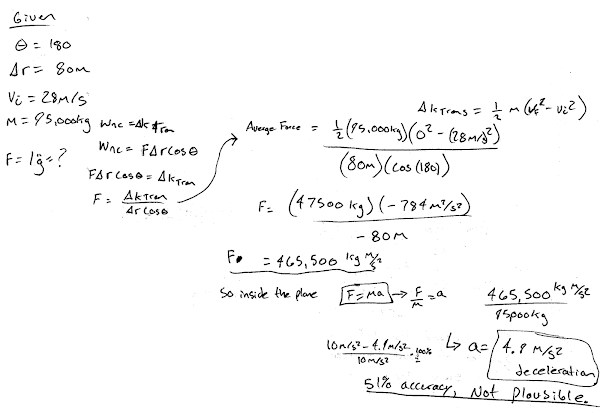