Watch as the very end of this whip cracks and breaks the sound barrier. As for me, when I look at this whip cracking...I'm thinking, dinosaur butt. (Video link: "WorldWideWhips introducing the Whip-Cam.")

This was the infamous Tacoma Narrows Bridge, where high winds set up standing waves that, unchecked, eventually destroyed it. They don't build bridges like that these days...or do they? (Video link: "Tacoma_Narrows_Bridge_destruction.ogg.") 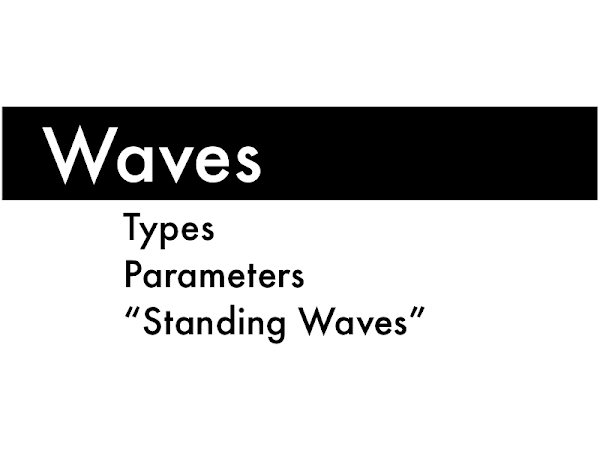 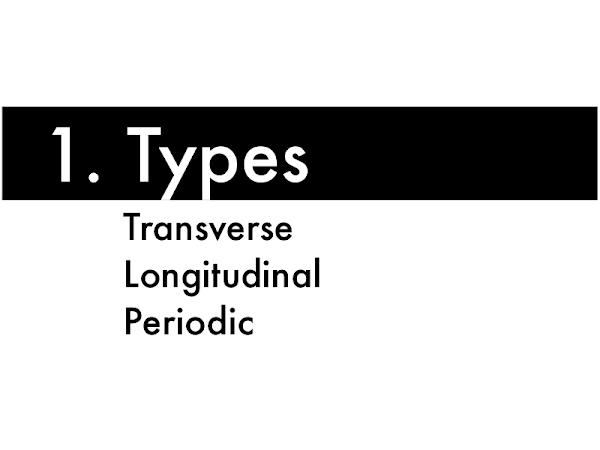 First, and overview of different types of one-dimensional waves.

For a transverse wave (here, a pulse) the disturbance is sideways to the direction of the wave motion. (Video link: "Transverse wave travel along a bungee cord.")

For a longitudinal wave (here, also a pulse) the disturbance is along the direction of the wave motion. (Video link: "Longitudinal waves in a spring in slow motion.")

If the disturbance (here, transverse) repeats itself periodically, then a periodic wave is set up along this rope. (Video link: "Transverse Waves.")

If the disturbance (here, longitudinal) repeats itself periodically, then a periodic wave is set up along this spring. (Video link: "Transverse & Longitudinal Waves.") 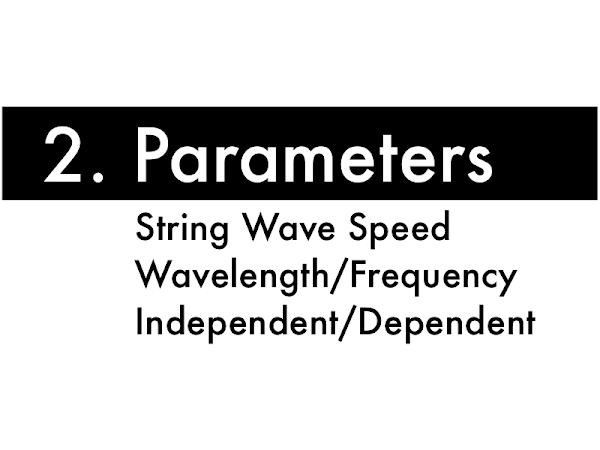 Next, we'll focus on waves on strings (and ropes, cables, and other similar media), and specifically on periodic waves along strings. 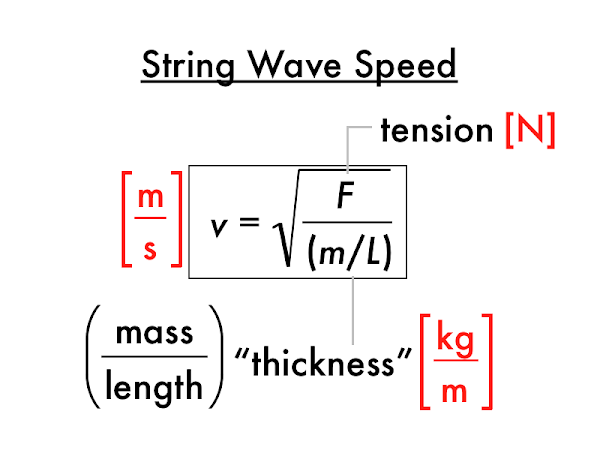 The speed of a transverse pulse or transverse periodic wave along a strong depends on the square root of the string tension (here denoted by F rather than T, which we'll reserve for period, as well as for temperature near the end of this course) divided by the linear mass density, essentially the "thickness" (mass per unit length) of the string. 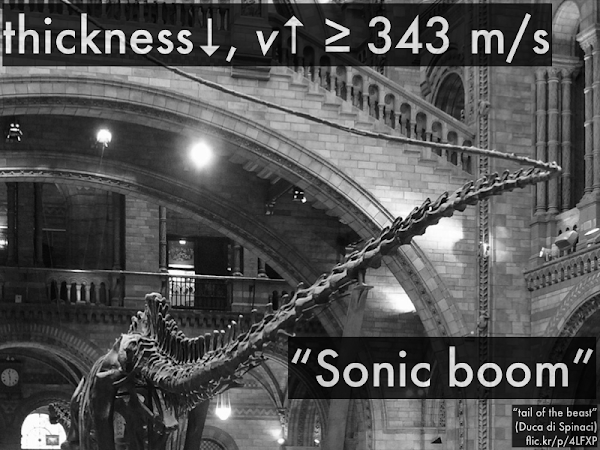 Which leads us to whips and dinosaur tails. A whip must be constructed that it tapers with decreasing thickness, such that as its mass per unit length (m/L) decreases, then the wave speed increases (assuming that tension remains approximately constant). If the wave speed at the end of the whip is faster than the speed of sound (nominally 343 m/s in air), then that part of the whip will move fast enough to break the sound barrier and create a sonic boom. Computer models of certain dinosaurs indicate that their tails may have been used as whips for defense and/or signaling.

The speed of periodic waves along strings is set by the string tension and thickness, but the frequency of the wave is set by the source. The resulting spatial repeat interval is the wavelength. 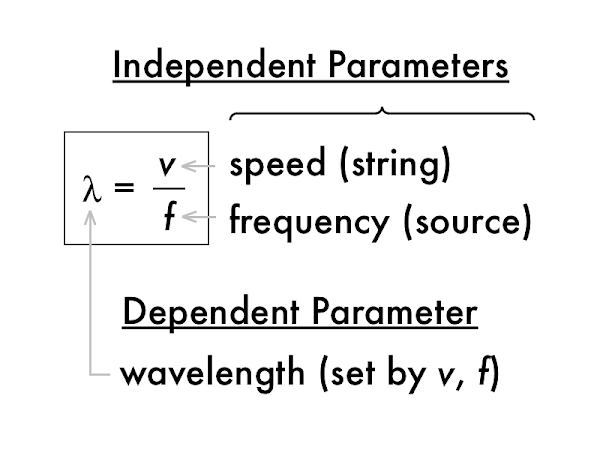 Here the hand oscillates up-and-down with the same amplitude, but the top case has a lower frequency and the bottom case has a higher frequency. Which wave travels with the faster speed? Which wave has the longer wavelength? (Video link: "141108difff.") 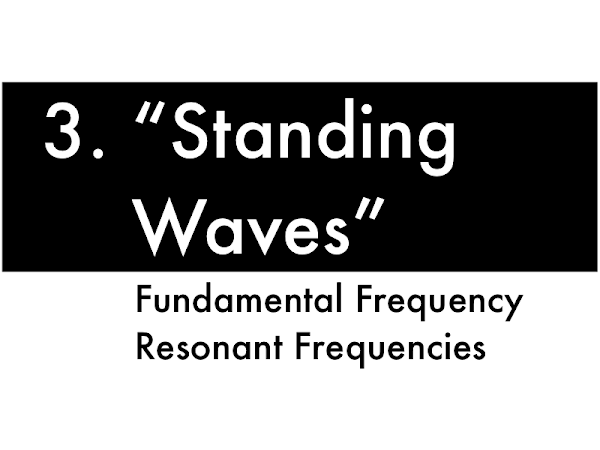 Third: "standing waves," which we'll discuss in terms of resonance, rather than the more involved approach of wave superposition and reflections.

If this string is periodically disturbed at the same frequency as its fundamental frequency, then the string will undergo resonance, as the timing of the periodic disturbances matches the natural vibration of the string. (Video link: "111104-1270800.")

You can also set the string into another resonance by oscillating it at exactly twice the fundamental frequency, this results in an interesting pattern where there is a node at the center, where the string is always fixed. This is where the "standing" in standing waves comes from. (Video link: "111104-1270801.")

And same goes for oscillating the string at exactly three times the fundamental frequency (resulting in two equally spaced nodes), and so on. (Video link: "111104-1270803.") 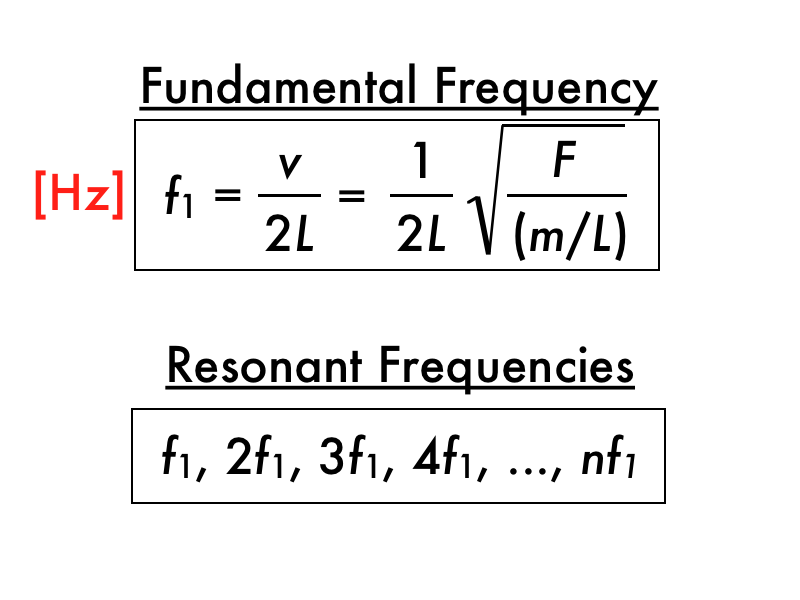