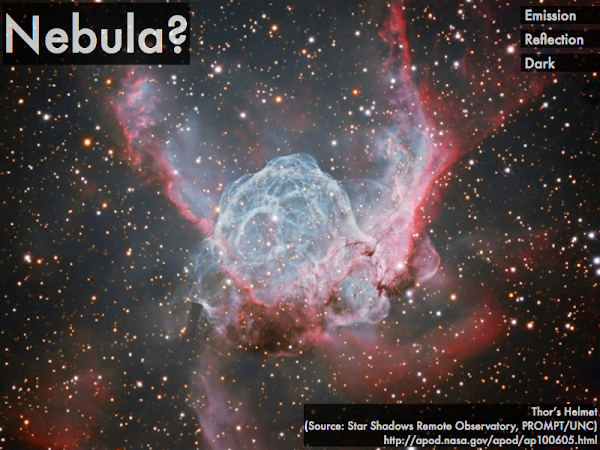 "The fusion process--I think it is interesting to know what causes the heat and light from the stars."

"Mst stars are born at the same time but age differently."

"Stars have automatic pressure-temperature thermostats. These are used to regulate temperature and pressure so the star can maintain stability. I find this process really crazy!"

"Smaller stars will live longer because they conserve their fuel better. I would have thought that bigger stars would live longer."

"Nebulae between stars could create more stars itself."

"Hydrogen is squished together to form helium, I had no idea this was possible."

"The gas must be very hot in order for the nuclei to have violent collisions and overcome the Coulomb barrier (repulsion), therefore room temperature would be implausible."

"Atoms all hate each other so the only way to make them collide and fuse to heat them up to millions of degrees so they're going so fast they don't notice before it's too late. They don't actually hate each other the charges of atomic nuclei just naturally repel other nuclei cause they're both mostly positive."

"The amount of energy required for fusion to occur would indefinitely raise the temperature, there is no way around it."

"I realize that the sun fuses four hydrogen nuclei to make one helium nucleus, but why does some mass 'vanish' in the process? Also where does it go?"(Albert Einstein's E = m·c2 equation says that you can convert mass into energy; since the helium nucleus has less slightly mass than the four hydrogen nuclei used to build it, the energy released from this process came from the mass that 'vanished!')

"Are you throwing a house party? I'll bring cookies."